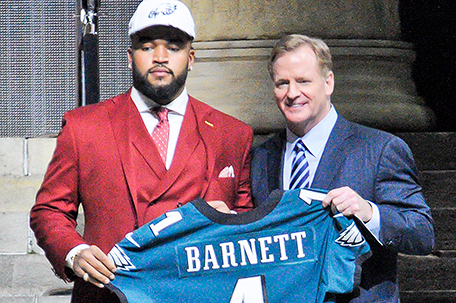 It’ll probably be another four or five years before we’re able to see just how successful the 2017 NFL Draft was for the Philadelphia Eagles.

In a year where the Eagles had needs at just about every position, it’s safe to say the Birds not only met their goal of picking up the best players available, but also filled some huge needs on defense.

“We feel like we did the right things for our team. Not necessarily for this moment but going forward,” said Howie Roseman, the Eagles vice president of football operations. “We got a lot of good people; people who reflect the values and culture and the playing temperament we’re trying to bring in.”

For an Eagles defense that has been in desperate need of a pass rush, picking former University of Tennessee star Derek Barnett at number 14 in the first round made sense because they believe that he can be the impact edge rusher the team has needed for some time.

Last season, the Eagles finished tied for 16th in sacks with 34 alongside last year’s Super Bowl participants the New England Patriots and the Atlanta Falcons. The Birds were 13th in pass defense.

What is probably going to excite Eagles fans about Barnett is that he broke the all-time sacks record at Tennessee of another legendary Eagle, NFL Hall-of-Famer Reggie White.  Barnett’s ability to quickly get off blocks and put the finishing clutches on an opposing quarterback is the thing that impressed Joe Douglas, the Eagles director of  player personnel.

“What Derek is highly proficient is a the top of his rush … he can really close,” Douglass said. “He uses a variety of moves. He uses a speed rush. He can go power. He can go from speed to power on people so you’re getting a guy who knows how to finish at the top of the rush.”

“Both players did not test high at the combine or pro day setting, but both are highly productive players.,” Douglas said. “High toughness, great people. (Barnett’s) production is unmatched, breaking a Hall-of-Fame player’s (White) record at Tennessee.

Considering the fact that Suggs is a can’t-miss Hall-of-Famer, that’s a bold statement.

During his time in Knoxville, Barnett had career 33 sacks against some of the nation’s most physical offensive tackles in the very athletic Southeastern Conference.

Barnett could start on the opposite side of veteran Brandon Graham who had a solid year last season with 5.5 sacks. The former Tennessee star will be competing with  Vinny Curry, the player everyone was touting to be the Eagles next big pass rusher who hasn’t quite lived up to the hype. Last season, Curry had just 2.5 sacks.

The Eagles also added depth to the defensive line by drafting Washington defensive tackle Elijah Qualls (6-1, 321 pounds) in the sixth round and Nebraska safety turned linebacker Nathan Gerry (6-2, 218) in the fifth round.

Perhaps the most important defensive need the Birds filled during this year’s draft was at the cornerback position. The Eagles second round draft pick and former University of Washington star Sidney Jones (6-0, 181) might have been the top-rated corner in the draft if he had not ruptured his Achilles tendon during his Pro Day.

Despite the injury, Eagles management is high on Jones and like what he brings to the table.

“The thing that jumps out most about Sidney is length and his feet,” Douglas said. “He is a very smooth mover and can easily flip his hips.  … He has a really good gauge on what the receiver is going to do at the top of his routes, and I think he has good ball skills.”

Both Roseman and Douglas say the team isn’t going to rush Jones return. He may not see any action until possibly October.

Meanwhile, Jones said he knows his work to recover from his Achilles injury is cut out for him and that it will not be an easy process.

“It’s going to take a lot of hard work, just getting my body back into shape and recovering from this Achilles injury,” said Jones, who was a second team All-American in his final season at Washington. “With the support system around me, it is going to be a collective effort.”

In the third round, the Eagles picked up former University of West Virginia cornerback Rasul Douglas, who was the nation’s co-leader in interceptions.

At 6-2, 209, Douglas, a native of East Orange, N.J. will be the tallest corner on the Eagles roster, and is big enough to take on some of the league’s best wide receivers.

The thing that really jumps out to the Eagles coaches is Douglas’s mental toughness. This is a young man that had to pay his own way to Nassau Community College in Garden City, New York. Douglas said he experienced many days when he went to practice hungry. That experience will serve as motivation for him.

Hopefully, remembering his hunger will help Douglas quench the Eagles hunger for a Super Bowl Championship.

City of Philadelphia releases information relating to the 2017 NFL Draft