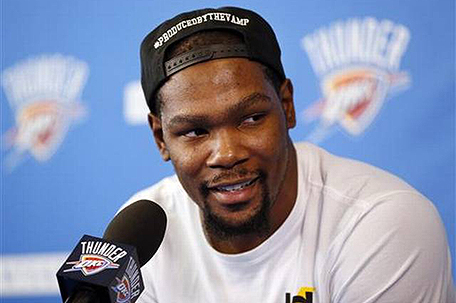 ABOVE PHOTO:  Oklahoma City’s Kevin Durant (35) speaks during a recent news conference at the team’s practice facility in Oklahoma City. Durant announced Monday, July 4, 2016 that he is joining All-Stars Stephen Curry and Klay Thompson with the Golden State Warriors. Durant made the decision public on The Players’ Tribune Monday morning. He can’t officially sign until July 7. (Nate Billings/The Oklahoman via AP, File)

When Kevin Durant decided to leave the Oklahoma City Thunder to play for the Golden State Warriors next year, the reaction from fans and pundits sounded familiar, but not in a good way.

For the last few days, I’ve been watching and reading the fallout of Kevin Durant’s decision (or, The Decision 2.0) to join the Golden State Warriors and have been amazed at some of the things I’ve read and heard.

First, there was my old Philly sports colleague Stephen A. Smith who called the move, “weak.” In fact, Smith got into a shouting match with fellow ESPN NBA analyst Chris Broussard over Durant’s move, which prompted a Facebook rant from Smith as well. TNT basketball analyst Charles Barkley also criticized KD’s move to Golden State as well.

But the worst reaction to Durant’s news came from Oklahoma City itself.  A white man named Westin Wood and some of his friends decided to riddle a Durant jersey with bullets from an automatic weapon and then set it on fire. This idiot then tweeted, “You leave us, we leave you.”

Now it’s not like this is the first time in history that an athlete has ever done this. At least Thunder fans didn’t have to watch Durant announce his choice on national television like Cleveland Cavaliers fans had to do when LeBron James decided to take his talents to South Beach.

But the virulence of some of these reactions has left me wondering why it is that people tend to lose their minds when African-American athletes assert some control over their careers or take a principled stand on something. It tends to drive folks, especially White men, a little nuts. It’s like they’re saying, “How dare you make a career move without our approval!”

It goes back to the whole just shut up and play thing.

The fallout from KD’s decision was equally as over the top as the reaction James’ “Decision” received. Folks unnecessarily got their underwear in a bunch over this because, at the end of the day, Durant made a business decision that he felt was beneficial to him—not to Smith, Barkley or those gun-toting morons.

Smith, in a blistering dissent, attacked Durant for abandoning Oklahoma City when they were on the verge of possibly upending Golden State’s reign over the Western Conference.  Smith said in his tweet, “Don’t give a damn what anyone says: weak move by KD. You go to GSW, the team who beat you when you’re already on a title contender? Please!”

(It should be noted here that there is some personal tension between Durant and Smith, who warned him the newest member of the Golden State Warriors that he did not “want to make an enemy out of him.”)

James left a Cleveland Cavaliers team in 2010 that probably should have won the Eastern Conference because he was unhappy with a management that didn’t surround him with better players.

But in the case of Durant, I think he had had enough of playing with Thunder point guard Russell Westbrook. Westbrook is a great player in his own right, but a point guard’s job is to distribute the ball to Durant and his other teammates, something he had a tendency not to do.

According to a story in “The Bleacher Report”, an unidentified source said that Durant wasn’t happy about how Westbrook tended to keep the ball to himself. KD wanted to be in an offense that moved the ball around enough to allow him to score.

In the playoff series against Golden State, the Thunder did a good job of moving the ball around in the games they won. But in the games they lost, it was one-on-one ball with both Durant and Westbrook feeling that they had to be the heroes.

While it’s easy for fans to be upset and for Barkley and Smith to be hypercritical, the important thing to consider is that Durant didn’t see it the way folks wanted him to.

Ultimately, KD thought about his own personal happiness and thought that Golden State was going to be his chance to get a ring and improve his game. You can’t be mad at a man for following his gut.

He’s no different than Wade Boggs abandoning the Boston Red Sox for archrivals the New York Yankees in 1992. There are fans in Boston who still hate Boggs to this day for doing that.  Deion Sanders helped lead the San Francisco 49ers to a Super Bowl win and then left to play with the hated Dallas Cowboys to get another ring.

While Durant made his name with the Thunder, (and won his lone Most Valuable Player award there), expecting him to stay there forever no matter what was unrealistic. He’s a grown man, and grown men are allowed to make their own decisions.