Deal… Or No Deal… 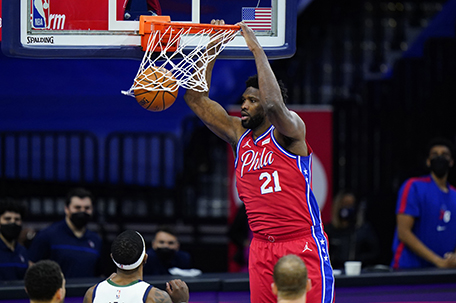 ABOVE PHOTO: Philadelphia 76ers’ Joel Embiid dunk s the ball during the second half of an NBA basketball game against the Utah Jazz, Wednesday, March 3, 2021, in Philadelphia. (AP Photo/Matt Slocum)

As the NBA Trade Deadline nears, will the Philadelphia 76ers put all their chips on the table for a championship, or will they stand pat?

If the NBA’s regular season were to end today, the Philadelphia 76ers would be the No.1 seed, center Joel Embiid would most likely receive the MVP award, and head coach Glenn “Doc” Rivers would probably be on the Coach of the Year award.

But in the here and now, we are a long way from the end of the regular season and the Sixers will have to contend with a hungry and immensely talented Brooklyn Nets squad that’s sitting a half game behind them in the Eastern Conference.

With the March 25 trade deadline looming, the big question for the 76ers is whether or not they are going to make the kind of trade that’s going to help them keep up with a talented Nets squad that seems to be getting stronger by the day.

After acquiring James Harden back in January, the Nets added another former All-Star in Blake Griffin, who was averaging 12.2 points per game with the Detroit Pistons. Although injuries have slowed Griffin to the point where he has yet to dunk in a game, he will be a valuable option to a team with three superstars.

The general consensus among more than a few NBA observers is that the Sixers are going to need more weapons to keep up with the firepower of the Nets.  Of course, fans are hoping general manager Daryl Morey will make the trade for Toronto Raptors star and Philadelphia native Kyle Lowry.

The former Cardinal Dougherty star is averaging 18 points and seven assists. Lowry, who becomes an unrestricted free agent at the end of the season, is also shooting 40 percent from three-point range. If the Sixers can pull this trade off, they will have a more balanced attack on offense to goal with Embiid, who is averaging 30 points per game and Harris, who is averaging 20-points per game.

If the Sixers are successful in acquiring the 34-year-old Lowry, they will have an offensive attack that’s better suited to a playoff run. As much as Ben Simmons can use his size to penetrate the defense as a point guard, teams during the playoffs aren’t going to allow him to get easy layups or find guys in the paint.

And that’s where Simmons’ inability to hit outside shots comes into play. Throughout the regular season, the critiques about Simmons inability to hit a 15-foot jumper have been mostly nonexistent because guys like Harris, Seth Curry, Danny Green, Furkan Korkmaz and Shake Milton have been the guys to fill it up from outside.

If the Sixers are going to go deep in the playoffs, they are going to be in situations where they are going to need a point-guard who can stick a jumper consistently enough to keep the opposing team from overplaying the low post and keeping Simmons from getting easy baskets.

But the 76ers have to make some hard choices for Lowry, who is in the last year of $33.3 million contract. Are they willing to part give up a future draft pick or young players like Matisse Thybulle, who is fast becoming a game-changing defensive specialist, rookie Tyrese Maxey or a guy like Curry or Milton?

You would hope that Morey wouldn’t mortgage the future in an effort to win now. But the Sixers haven’t won an NBA championship since 1983 and haven’t been to the NBA Finals since 2001. With the way Embiid and the rest of team are playing right now, this might be the Sixers best opportunity to bring a championship back to Philly and they might be one piece away from doing it.

If the Sixers pull the trigger on Lowry, they will get a veteran leader who has a championship ring, knows how to put guys in the right positions, and is a good defender who can shoot from three-point range.  I don’t know how they’re going to do it, but they have to make this deal.

Let’s see if they play or fold.