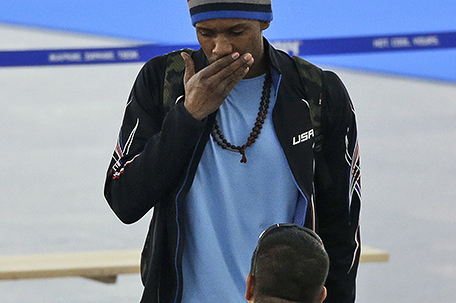 ABOVE PHOTO: Shani Davis of the U.S. stands with his coach Ryan Shimabukuro and looks downward in dejection after the men’s 1,000-meter speedskating race at the Adler Arena Skating Center during the 2014 Winter Olympics in Sochi, Russia, Wednesday, Feb. 12, 2014.  (AP Photo/David J. Phillip )

SOCHI, Russia — Shani Davis went from sure thing to nothing in 2 1/2 laps.

The two-time defending Olympic champion in the 1,000 meters got shut out of a medal on Wednesday, finishing eighth in a race he has dominated in recent years.

Now, the 31-year-old from Chicago has three days to clear his mind and make adjustments before he skates in the 1,500 on Saturday at Adler Arena.

Davis was one of the U.S. speedskating team’s best hopes for a gold medal. The Americans have yet to make the podium through the first five days of competition.

‘’It’s unfortunate for us,’’ he said. ‘’Now we move forward and try to figure out what we can possibly do to fix it.’’

Davis planned to study video of the loss to ‘’see what these guys were doing that I wasn’t doing.’’

‘’I just got to try to piece it together and figure it out for myself so I can possibly fix it for the 1,500,’’ he said.

In the 1,000, Davis had a slower opening than gold medalist Stefan Groothuis of the Netherlands, and then lost 0.35 in the first full lap. He slowed in the final lap and finished in 1 minute, 9.12 seconds. Racing against Davis, Dutchman Koen Verweij overtook the American at the finish line in the next-to-last pairing.

‘’Watching it was agonizing,’’ said Canadian Gilmore Junio, who gave up his spot in the race to teammate Denny Morrison, who took the silver.

Groothuis won in 1:08.39, more than seven-tenths of a second ahead of Davis. Michel Mulder of the Netherlands earned the bronze to go with his gold from the 500.

‘’I think a lot of people were shocked with how fast the times were,’’ Brian Hansen said.

He and the other Americans fared worse than Davis.

Hansen of Glenview, Ill., finished ninth, Joey Mantia of Ocala, Fla., was 15th and Jonathan Garcia of Houston was 28th.

‘’We have a lot of depth in this race,’’ said Hansen, who became nauseous after his race. ‘’We didn’t show it out there, but we do.’’

Besides Davis, Hansen and Mantia, Jonathan Kuck of Champaign, Ill., will skate in the 1,500.