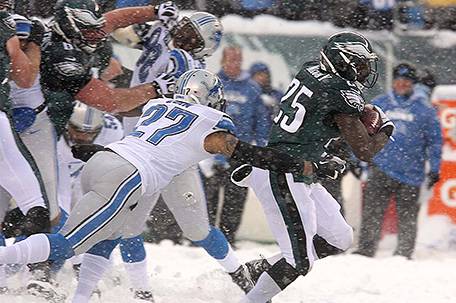 ABOVE PHOTO: LeSean McCoy had a record-setting performance in the snow against the Detroit Lions.

In the midst of a blustery snowstorm at Lincoln Financial Field, Eagles running back LeSean “Shady” McCoy plowed his way through the Detroit Lions tough interior defense with a career rushing performance that helped the Birds to maintain first-place in the NFC East.

McCoy rushed for a team-record 217 yards with four to six-inches of snow on the ground in the Eagles 34-20 win over the Detroit Lions. The Birds leading rusher broke Hall-of-Fame running back Steve Van Buren’s single-game team record of 205 yards set back in 1948 thanks to a pair of electrifying 40-yard-plus touchdown runs.

“I thought LeSean did an outstanding job,” said Eagles head coach Chip Kelly. “We’ve been trying to preach here just hitting things downhill. It was very tough, especially with this defense, to go lateral. I thought the job those three inside guys did was outstanding, Todd (Heremanns), Jason (Kelce) and Evan (Mathis) against two really good defensive tackles.

“Then we started changing up formationally some of the looks so they couldn’t chase us down a little bit from the backside.”

McCoy credited his offensive line for knocking Detroit defensive lineman Ndamukong Suh and Nick Fairley off the line of scrimmage and giving him some room to run in the second half.

“The guys up front gave me opportunities one-on-one by blowing those guys off the ball,” McCoy said. “I think everybody is so intimidated and scared of Detroit’s guys up front, but I thought the guys on my team took the challenge and stepped up. The whole week they talked about just running the ball and giving me some different matchups one-on-one.”

When asked about setting the team record, McCoy said he had seen films of Van Buren, who once gained 196 yards rushing in a snow storm during the 1948 NFL Championship game, and liked his running style.

“He’s definitely a Hall of Famer and one of the best backs to ever play this game, and he played here in Philadelphia,” McCoy said.  “It means a lot. I think records are meant to be broken, and it’s been standing for so long.  I actually watched some tape of him. He was pretty good and very dominant.”

Eagles center Jason Kelce said the focus of the offensive line’s game plan was to slow Suh and Fairley down. The inclement weather helped, he said.

“Those guys rely on such explosion and I think that slowed them down,” Kelce said. “Overall, going into the game we knew those were their two primary guys we need to take care of.”

The Eagles (8-5) overcame a 14-0 third-quarter deficit thanks to the running of McCoy and the passing of quarterback Nick Foles, who despite throwing his first interception of the season, had a solid performance.

“I have never played in a game quite like that and obviously we did not play that well in the first half. Weather conditions aside we still have to go out there and execute,” Foles said.

It was Foles 19-yard touchdown pass to DeSean Jackson late in the third quarter that gave the Birds their first touchdown of a game that seemed to be going nowhere fast.  Foles completed 11-of-22 passes for 179 yards with one touchdown. He also scored on a one-yard run.

For the game, the Eagles offense rolled up 478 yards— including 299 yards on the ground. The Birds won the game by scoring 28 points in the fourth quarter. Two of those touchdowns came on a pair of exciting runs by McCoy that tied that game and put the Eagles on top for good.

Early in the fourth quarter, McCoy took a handoff from Foles and sprinted 40 yards to the touchdown that cut the Lions lead to one. Backup running back Bryce Brown’s run on the two-point conversion evened the game at 14.

The turning point on that drive was a questionable roughing the passer call against Fairley on second and 10 from the Eagles 45. That moved the ball to the Lions 40. Two plays later, McCoy scored.

“We just have to play after that,” said Lions head coach Jim Schwartz. “That penalty doesn’t a score a touchdown.”

On the ensuing kickoff, Lions return specialist Jeremy Ross took to Alex Henery’s kickoff 98 yards for a touchdown to give Detroit a 20-14 lead. Ross also had a 58-yard punt return for a touchdown in the third quarter.

It took the Eagles just three plays for McCoy’s 57-yard run that put them on top for good. Foles pass to wide receiver Riley Cooper on the two-point conversion made the score 22-20.

McCoy, who is known as a shifty runner with good lateral moves, was strictly north-south on Sunday, but still put on a few moves once he got into the secondary.

“People don’t know,” McCoy said at his locker after the game. “They see the moves I make, but I actually like to run between the tackles. It gives me so much leverage in terms of being able to go up the middle, bringing it outside or reversing it.”

The Birds closed the show on a one-yard quarterback sneak by Foles and a 38-yard run by Chris Polk.

The conditions on the field were so bad that the kicking game as means of scoring or for extra points was useless. The Eagles attempted two-point conversions instead of kicking. They were two out of four. When the Lions tried an extra point after a fourth-quarter touchdown, it was blocked. No field goals were attempted.