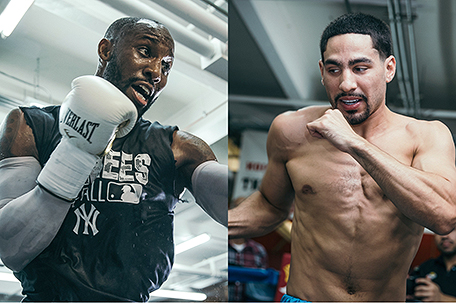 ABOVE PHOTO:  Welterweight boxers Shawn Porter and Danny Garcia showing off their ultimate forms during the media workout before the showdown on Showtime on Saturday night, Sept. 8.  (Photos from Amanda Westcott/SHOWTIME)

BROOKLYN–Welterweight stars Philadelphia’s Danny Garcia and Shawn Porter kicked off fight week in Brooklyn on Wednesday with media workouts ahead of their showdown for the vacant WBC Welterweight World Championship taking place this Saturday, September 8 live on SHOWTIME from Barclays Center, the home of Brooklyn Boxing™ and presented by Premier Boxing Champions.

Tickets for the live event, which is promoted by TGB Promotions and DiBella Entertainment, in association with DSG Promotions, start at $50 and are on sale now. Tickets can be purchased at ticketmaster.com, barclayscenter.com, or by calling 800-745-3000. Tickets can also be purchased at the American Express Box Office at Barclays Center. Group discounts are available by calling 844-BKLYN-GP.

Here is what the fighters had to say from world famous Gleason’s Gym in Brooklyn:

“This is a very important fight for me. This fight is an opportunity to prove that I’m still one of the best fighters in the world. I’m coming to get my belt back.

“Shawn’s style is exactly what I like to go up against. I want him to come forward and walk into my counter punching. I have power in both hands and I’m going to make him feel it.

“If he comes and opens up, I’m going to land a clean shot early. If he can’t recover, then I’m going to have a chance to finish him. I’m going to dictate the pace and fight my fight.

“I’m ready for anything. I’m prepared to fight backwards, forwards or whatever I need to do. I have to set the tempo and dominate. Shawn is very hungry, so it’s important for me to be smart and pick my spots.

“I know he’s going to try to jab his way in. Shorter guys like him tend to go to the body too. He has skills but I’ve had great preparation to be ready for any of it. We have some stuff up our sleeve.

“We’re just working smarter not harder this camp. We’ve worked on our agility a lot and we tried some different things to keep my legs strong.

“I’m really excited for the Barclays Center crowd. It’s great to be back in the ring and I’m blessed to have another world title fight. I’m grateful and I’m going to make the most of it.”

“This is a huge fight. It’s the biggest fight of my career and my life. I’ve been doing this since I was eight and I can’t think of an opportunity that I’ve wanted more in my life. This is my Super Bowl.

“I’m not looking for any surprises on Saturday. I’m very familiar with his game plan and what he does well. I expect to use my speed, box from the outside, be aggressive and win the fight.

“I think that my ability to mix it up is going to create a problem for him. The variance in my styles and punches is going to be too much for him. I’m going to keep him on his toes, keep him guessing and keep him off balance. That’s the key to winning Saturday.

“The Kell Brook fight is only on my mind because I know that’s a fight someone will watch to try to figure out how to stop me. He’s going to try and hold like in that fight and do it even more than Brook did. Other than that, he has no chance of catching me coming in.

“It’s going to be everything I do that will help me get this win. It’s the work rate, power and a different level of speed than he’s used to. Nobody has my combination of that power and speed.

“I just don’t think Danny can handle me. He says I’m tailor-made for him, but we’ll see on Saturday night.

“Brooklyn is like a second home for me. I’m very comfortable here and I’m excited to perform in front of these great fans yet again.”