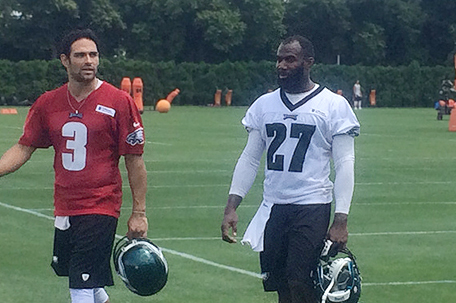 ABOVE PHOTO:  Eagles safety Malcolm Jenkins walking off the field with Eagles backup quarterback Mark Sanchez. Jenkins is fast becoming the leader of the Eagles secondary.  (Photo by Chris Murray.)

The last time the Philadelphia Eagles had a true enforcer at the safety position was in January 2009 when Brian Dawkins started for the Birds in the NFC Championship game against the Arizona Cardinals.

Since then, none of Dawkins successors at that position have come close to matching his intensity or effectiveness. For all that was said about the improvement of the defense in 2013, the Birds defensive coaches were not happy with the play at the safety position-both free and strong.

The Eagles pass defense ranked 32nd in passing yardage and the coaching staff attributed that to the back end of the defense at the safety position. Assistant defensive backs coach Todd Lyght said tackling was the main culprit.

“In an NFL defense, you have to have great tacklers at the safety position because that’s the last line of defense,” Lyght said. “Last year, we missed some tackles at the safety spot that really hurt us and gave up some big yards. That’s part of the game. That’s one area we’ve addressed and we’re going to get better at. … The big thing for us is that we have to be tacklers in the secondary.”

The most notable acquisition from the offseason is former New Orleans Saints safety Malcolm Jenkins. Defensive Coordinator Billy Davis likes Jenkins’ versatility because he’s also played at the cornerback position. He said Jenkins is a physical player who is also good at pass coverage.

Jenkins said he wants to bring his knowledge of opposing offenses, his ability to deliver a hard hit and his knack for covering receivers.

“In the secondary I feel we have the toughest jobs out on the field and the safety position is demanding because you have to need the knowledge to put guys in the right position because you’re the quarterback of the defense,” Jenkins said.

“It’s also becoming one of those positions where you have to be in the box but you also have to cover receivers and cover tight ends. It’s very demanding both physically and mentally.”

What has impressed the coaching staff about Jenkins during the organized team activities and minicamp is his leadership on and off the field working with players like Earl Wolfe and Nate Allen.

“Malcolm Jenkins is a great leader,” Lyght said. “I love what he’s brought to the room. His intelligence, his tenacity, his intensity in practice and I love his leadership qualities because he doesn’t really get on the players, but the way he leads, he turns everything into a competition which elevates everybody’s intensity.”

Lyght said that Jenkins has had a positive influence on younger players like Wolfe, who went from sitting in the back of the class during film sessions to up front with Jenkins.

Davis said Jenkins often leads the group in film sessions and meetings long before the coaches come into room to get things started.

“They’ve had meetings without us which is a great sign,” Davis said. “These guys get together and they watch film. They’ve got 100 questions. These are the signs that the guys are doing their work.”

During minicamp, Jenkins said that he’s not necessarily the inside the box free safety that Dawkins was or is going to play the role that Earl Thomas plays in the Seattle Seahawks secondary.

“One of the reasons they brought me in is because for this specific scheme you need safeties that can be versatile you don’t have a true free or strong safety,” Jenkins said. “Both guys have to play in the box, both have to cover receivers and both have tight ends and have to be the quarterback.”