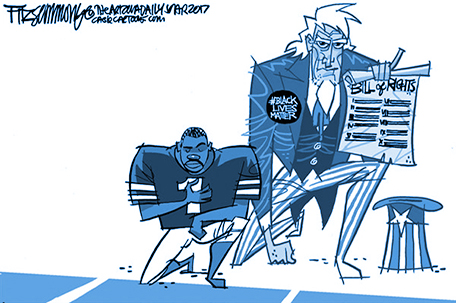 If NFL owners want to show that their actions this week weren’t part of a publicity stunt, one of them will give Colin Kaepernick a job. Now.

For most of us, the combination of President Donald Trump, a live microphone, an adoring crowd and a Twitter feed inspires deep seated fear.

But Trump’s latest tirade may wind up righting a wrong that’s led many Black NFL fans to find something else to do with their time.

It may get Colin Kaepernick the contract that he should have had already, especially when you take the really crappy quarterback play we’ve seen this season into consideration,

During a campaign appearance for Republican Senate candidate Luther Strange in Alabama Friday night, Trump, as he tends to do, launched into a profanity-laced tirade against athletes protesting police brutality during the National Anthem.

“Wouldn’t you love to see one of these NFL owners, when somebody disrespects our flag, to say, ‘Get that son of a bitch off the field right now. Out! He’s fired. He’s fired!’ Trump said.

The league — including the owners who donated millions to Trump’s inauguration — cried foul, and many of them showed their displeasure by joining their players in a variety of protests.

Philadelphia Eagles owner Jeffrey Lurie and head coach Doug Pederson all locked arms with one another along the sidelines as safety Malcolm Jenkins raised his fists in the air during the national anthem. The New York Giants players and coaches also locked arms as well.

In Chicago, the Pittsburgh Steelers, with the exception of offensive lineman (and war veteran) Alejandro Villanueva, refused to leave their locker rooms during the national anthem, as did the Seattle Seahawks and Tennessee Titans.

In London, members of the Baltimore Ravens and the Jacksonville Jaguars took a knee before the national anthem. One of those was retired defensive legend Ray Lewis, a Kaepernick critic.

(Black Twitter really let him have it for that, by the way.)

Even Dallas Cowboys owner Jerry Jones, a critic of the protests and one of Trump’s million dollar boys, took a knee. Granted, it was before the anthem…but I guess it’s the thought that counts.

Malcolm Jenkins was optimistic about what this could mean long term.

“At this point, it’s due time for people to use the voices they have,” Jenkins said after the Eagles win over the New York Giants. “Players stood on their own platforms and have taken the brunt of it this whole year. I think as  people continue to push for divide and division, I think it’s important for those in the league, that are teammates, to be able to support those that are really trying to make an impact on communities.”

I wish I could join him in that optimism.

But, until they do right by Kap, I’m going to be skeptical of this ‘kumbaya’ thing.

But until I see Colin Kaepernick on a practice field, this was all just a publicity stunt.

When I talk to players like Jenkins and Eagles wide receiver Torrey Smith, they speak in glowing terms about the good that Kaepernick has done in terms of raising awareness and more importantly, spurring other players to action and using their voice to make change.

He shouldn’t have to pay for raising that awareness with the best years of his playing career in the same way Muhammad Ali did when he refused to be inducted in the United States Army. He shouldn’t be used as a means to scaring people out of the patriotism of protest.

I pray that NFL Commissioner Roger Goodell and the NFL owners have the moral courage to acknowledge the greater good that Kaepernick was trying to do and to contribute its vast largess to help end systemic racism in America.

And this acknowledgment should come in the form of allowing him to get back to work.