The Contract That Broke The Color Line 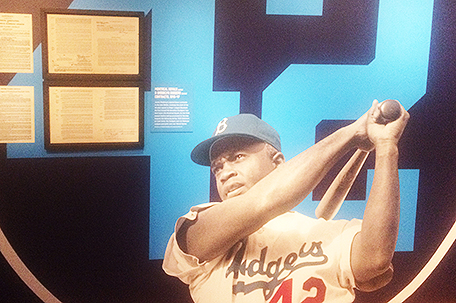 Jackie Robinson’s history making contract with the Brooklyn Dodgers is on display at the National Constitution Center until June 5.

When the Founding Fathers signed the Declaration of Independence and the Constitution, they did so without taking the rights and freedoms of African Americans into consideration.

The tumultuous journey of African-Americans from slavery to the Civil Rights Movement to the current cries of Black Lives Matter has been about making America live up to the lofty ideals of freedom and equality those documents imply.

When Jackie Robinson signed a contract to play Major League Baseball for the Brooklyn Dodgers, that contract became an influential document not only for sports fans, but also for the nation as a whole.

Even the Rev. Dr. Martin Luther King took notice. In a conversation he had with Hall of Famer Don Newcombe, King expressed his appreciation for Robinson’s willingness to lead the charge.

“You’ll never know how easy you and Jackie and (Larry) Doby and Campy (Roy Campanella) made it for me to do my job by what you did on the baseball field,” King said. 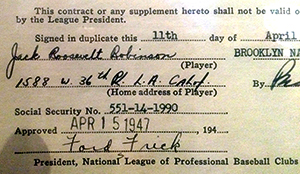 A copy of Jackie Robinson’s signature on the contract to play for the Brooklyn Dodgers. (Photo: Chris Murray)

From now until June 5, you can see the original contract that Robinson signed with the Brooklyn Dodgers at the National Constitution Center.

While there are a lot of important documents on display at the Constitution Center, the Robinson contract is equally as compelling as all the others. Robinson’s contract symbolized the first major confrontation with a segregated America and was part of the ongoing battle to make the country live up to it’s ideas of equality and justice.

Robinson’s entry into major league baseball was met with violent hostility both on and off the field. He was spiked by his opponents and jeered by hostile white fans who were offended by the mere presence of African Americans in what was supposed to be the American game.

In his first two years with the Dodgers, Robinson had to take affronts to his personal dignity for a cause that went beyond the box score. Eight years later, ordinary African-Americans from students to janitors were peacefully sitting in at lunch counters, boycotting segregated public transportation and education facilities.

When you think about it, Robinson striking down baseball’s color barrier preceded President Harry S. Truman’s executive order to integrate the military, Brown versus Board of Education, the Montgomery Bus Boycott, Freedom Rides, lunch counter sit-ins, Birmingham movement, the March from Selma to Montgomery and the March on Washington. Dr. King described what Robinson went through:

“A pilgrim that walked in the lonesome byways toward the high road of Freedom. He was a sit-inner before sit-ins, a freedom rider before freedom rides.”

It’s actually kind of fitting that Robinson’s contract is hanging out here in the City of Brotherly Love. Philadelphia didn’t live up to that name when it came to him. Robinson had to deal with racism and hatred, he couldn’t stay in the same hotels as his teammates, and that’s on top of having to deal with a hostile Phillies squad led by manager Ben Chapman.

Black folks didn’t forget that hostility. An entire generation of African-American baseball fans refused to root for the Phillies even when they started signing Black players to the team and Black players, including free agency pioneer Curt Flood, didn’t want to play here either.

Recently, Philadelphia City Council issued a resolution apologizing to Robinson and his family for the harsh treatment he received here as a baseball player.

So like the Constitution, Robinson’s contract is a piece of paper that symbolizes how far we’ve come and how far we’ve got to go in race relations in America.