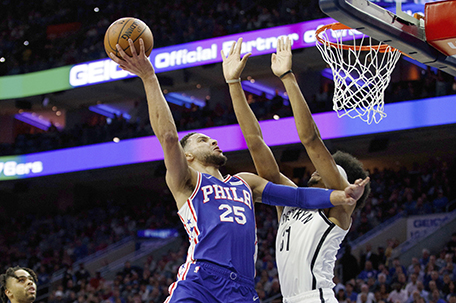 ABOVE PHOTO: Philadelphia 76ers’ Ben Simmons, left, of Australia, goes up for the shot against Brooklyn Nets’ Jarrett Allen, right, during the first half in Game 2 of a first-round NBA basketball playoff series, Monday, April 15, 2019, in Philadelphia. (AP Photo/Chris Szagola)

The Philadelphia 76ers showed flashes of brilliance in Game Two of their series against the Brooklyn Nets. To get to the finals, though, they’ll have to continue bouncing from their bounce back game.

If the Philadelphia 76ers can bottle the offensive magic that led to a 51-point third quarter in Game 2 of the team’s best-of-seven first-round series against the Brooklyn Nets, they might get to the NBA Finals—this year.

After dropping Game 1 to the Nets, the Sixers bounced back to even the series with a 145-123 win and may have come up with a blueprint to take to Game 3 at the Barclays Center for how to handle a Brooklyn squad that doesn’t have the same level of talent.

For one thing, point guard Ben Simmons asserted himself in the offense. After hearing the boos from Sixers fans in Game 1, Simmons turned them into cheers with a triple double (18 points, 10 rebounds and 12 assists). His aggressiveness set the tone of the game for the Sixers. Simmons’ energy and aggressiveness was contagious for his teammates who fed off his energy, especially in that huge third quarter.

Simmons said head coach Brett Brown challenged him to get the team going in that second half.

“He called me out where I messed up on plays,” Simmons said. “He yelled at me. I love to see that side of him because it motivates me.”

Simmons said his team has to play every playoff game with the kind of energy and intensity that they had in Game 2.

“We have to keep that same mentality coming into the game,” Simmons said. “We need every game. We know what it feels like to lose.”

Throughout the season, folks on social media have been coming down on Brown and calling for his head, saying that he doesn’t know how to light a fire under his team when things get rough. Simmons said his teammates like it when Brown challenges them.

“That’s the first time I’ve seen him like that,” Simmons said. “For me I love it. I love seeing a coach get like that because it fires everybody up. It’s lets everybody know that this isn’t a joke. This is our job. For us to see that side, we love it. “

Although center Joel Embiid hasn’t been 100 percent, no one from Brooklyn can defend the former Kansas star inside the paint or even on the outside. In just 21 minutes on the court, Embiid scored 23 points and pulled down 10 rebounds.  Perhaps the most interesting stat of that game was something Embiid didn’t do in Game 2: he didn’t attempt a three-point bucket

But in a series where they have an obvious size advantage in the low post, the Sixers need to exploit the Nets with Embiid’s presence in the paint. Who’s going to stop him? When Embiid dominates that low post, guys like Jimmy Butler and Tobias Harris are going to find some spacing to shoot the ball from the perimeter or take guys off the dribble.

Perhaps the biggest challenge for the Sixers in this series against the Nets and anyone they could face in the playoffs, is their inconsistency on the defensive end. In the first two games of this series, the Nets have shot over 40 percent from three-point range.

The key for the Sixers team is to run the Nets off the three-point line and make it difficult for them to hit three-point shots. They have to win the rebounding battle. In Game 2, the Sixers dominated the boards on both offense and defense, taking a 49-32 rebounding edge.

“We know defensively how locked in we need to be … I thought our big run was created by getting stops and getting out in transition. Scoring off their turnovers was huge for us,” Harris said during Sixers practice earlier this week. “We saw that game 2. Just the intensity of pushing them off the three-point line and making them take tough 2s.”