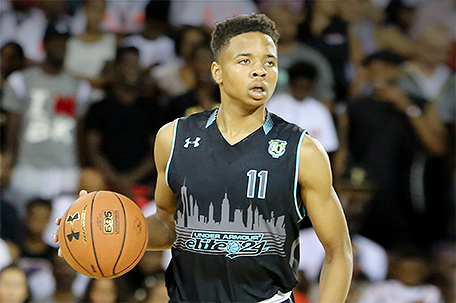 ABOVE PHOTO:  Team Doo Be Doo’s Markelle Fultz #11 in action against Team EZ Pass in the Under Armour Elite 24 game on Saturday, August 22, 2015 in Brooklyn, NY. (AP Photo/Gregory Payan)

Thanks to a trade with the Boston Celtics, the Philadelphia 76ers got the first pick in the NBA Draft. Can we start winning now, please?!

By the time you see this story, the Philadelphia 76ers will have drafted former University of Washington Markelle Fultz with the NBA Draft’s No. 1 pick.

The addition of Fultz will no doubt raise expectations among Sixers fans, some of whom are having visions of the playoffs dancing around in their heads. But before you start making plans to challenge LeBron James and the Cleveland Cavaliers for the Eastern Conference, the 76ers still have a long way to go to get to the next level.

In other words, this isn’t the end of The Process, it’s just another phase.

For starters, will the team even get its top draft pick on the floor during the regular season? That’s a legitimate question because it hasn’t happened throughout the life of “The Process.” Last season, it was Ben Simmons’s injured foot that kept him off the court all last season. Joel Embiid and former Sixers big man Nerlens Noel also spent their first seasons nursing injuries.

But there are some other things that might lead to a little healthy skepticism when it comes to Fultz despite his huge upside.  In his only season with the Huskies, the six-foot-four Fultz averaged 23 points, nearly six assists and 5.7 rebounds per game for a team that finished 9-21.

The Huskies dismal record during Fultz’s freshman year caused more than a few scouts to question his competitive fire and whether he can make a team better. Of course, the counter argument to that view is that Fultz didn’t have the talent around him during his days at Washington. You can’t make lemons into lemonade all the time.

Fultz’s success as an NBA rookie will ultimately depend upon the availability of both Embiid and Simmons, and if they can stay healthy for the majority of the season. If Simmons is healthy, the question then becomes who’s going to play the point for the team?

From what I’ve seen of both players on tape, Fultz tends to look for his shot more than Simmons, who is unselfish almost to a fault. It probably makes sense for Simmons to be the primary ball handler because he looks to pass first.  I do hope that Simmons, who can score in the low post, works on his outside shot as a point guard. That would make him insanely dangerous down the line.

I reviewed the tape of Fultz in a Washington home game against UCLA and Lonzo Ball. Fultz (25 points) actually outscored Ball (22 points), but the Bruins blew the Huskies out by about 30 points. What stood out to me in that game was Fultz’s ability to knock down the three-pointer. He shot 41 percent from behind the three-point arc.

Fultz also showed that he can play off the ball and create his own shot. He can also score with a couple of defenders in his face and take people off the dribble because of his ball-handling skills.

If Fultz can duplicate those numbers at the NBA level, the 76ers, in the near future, could be one of the best teams in the Eastern Conference.

The hard part for Sixers head coach Brett Brown is to get this group on the same page and hope that they can survive training camp and preseason without anyone ending up on the injured list.

A healthy Embiid would no doubt take pressure off both Fultz and Simmons, who will be a rookie in his second year.  Embiid, when he’s on his game, is a major force for the 76ers as a scorer in the low post. Last season, he averaged 20.2 points and eight rebounds in 31 games in 2017. They key for Embiid and the Sixers is for him to stay healthy for than 30 games.

Embiid’s presence will certainly open up things for not only Fultz and Simmons but also Dario Saric, who got better on both ends of the floor as the season progressed.  The Sixers could also use some experienced veteran free agents moving forward.

We can see the light at the end of the tunnel with the Sixers, but slow your roll with all the playoff talk. The team’s first major battle will be to get everybody on the floor at the same time…without crutches or casts.