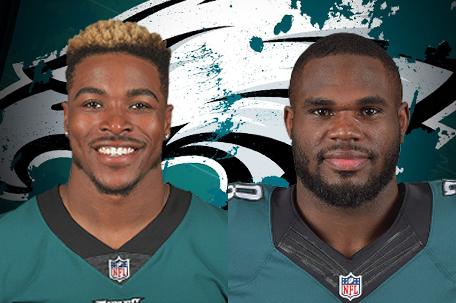 When it comes to running backs, the Super Bowl Champion Philadelphia Eagles have an embarrassment of riches.

The most competitive position for the Philadelphia Eagles in this year’s edition of training camp is running back, even with the departure of free agent LeGarrette Blount.

In my own unofficial depth chart, you’re going to see Jay Ajayi and speedy veteran Darren Sproles as the top two backs.

Corey Clement, who had a big touchdown pass in Super Bowl LII, has probably nailed down the third running back slot by continuing to prove that he can contribute to both the passing and running game for the Eagles. In the preseason opener against the Pittsburgh Steelers, Clement picked up where he left off last season, gaining 30 yards on six carries with an average of 6 yards per run.

But who wins the fourth spot in the running back rotation for the Super Bowl champs is anyone’s guess at this point. But, they’ll be plenty of chances for the remaining running backs to show why they should get that spot, starting with Thursday’s game against the New England Patriots.

Let’s start with veteran running back Wendell Smallwood. He’s in his third year in the league and has shown that he has the talent to be an NFL running back. So that’s not the problem here.

His inability to avoid the injury bug is.

In the first four games last season before the team acquired Ajayi from the Dolphins, Smallwood touched the ball 36 times. But after missing two games with a strained right knee, he only got another 24 touches the rest of the season. It didn’t help that Clement, an undrafted free agent out of Wisconsin, made the most of his opportunities on the field.  In fact, Smallwood was on the inactive list for Super Bowl LII.

So far, this preseason, Smallwood has been relatively free of injuries and has taken advantage of his time on the field, said Eagles offensive coordinator Mike Groh.

“I think Wendell is doing a good job of trying to maximize every opportunity that he’s got. That’s what you’ve got to do,” Groh said after practice earlier this week. “We’ve got a crowded room there and there’s a lot of talented people there. You’ve got to make the most of every opportunity, whether it’s with or without the ball.”

In the Birds last preseason game, Smallwood had a decent game playing with the third and fourth stringers.  Up until his final carry of the game where he lost five yards, Smallwood was averaging five yards per carry. But that loss of yardage, knocked his final total to 21 yards on six carries, giving him an average of 3.5 yards per carry.

“I thought Wendell ran extremely hard,” said head coach Doug Pederson. “ He ran extremely hard. Unfortunately, he did put the ball on the ground the one time. We were fortunate to get it back. He’s a guy that just continues to flash and do some really good things. …  I think he understands that competition is a real thing. It’s making him sort of focus in and dial in. He’s done a really nice job in camp up to this point.”

The one thing that might keep Smallwood on the roster is that he is a contributor on special teams.

Another player on the bubble because of the injury bug is second-year running back Donnel Pumphrey.  A fourth-round pick from San Diego who ended his college career as the NCAA’s career leader in rushing, Pumphrey was supposed to be the heir apparent to Sproles when the all-purpose back retires at the end of this season.  But he didn’t play in the Steelers game because of a lower body injury.

Pumphrey was having a good training camp, according to Eagles coaches. But his absence on the field hurts his chances to make the team. After spending an injury-riddled season on the practice squad last year, this preseason may be his last chance to prove his worth to the Birds.

“It’s hard for young players, quite honestly to make rosters,” Pederson said. “He’s(Pumphrey) done some nice things.  We have to make sure he’s healthy again before we put him on the field to see where he’s at.”

Meanwhile, Eagles fans got a chance to look at former Notre Dame and Central Bucks star Josh Adams. Despite a stellar career with the Fighting Irish, Adams signed with the Birds as an undrafted free agent and was anxious to show the fans what he can do.

Adams played well enough to gain 30 yards on six carries while averaging five yards per carry.  Granted, he was playing against third and fourth stringers, but Adams used his 6-2, 225-pound frame to impose his will on the Steelers defense whenever got the ball.

“I just tried to take advantage of every opportunity I got,” said Adams, who gained 3,201 yards and scored 20 touchdowns during his three years at Notre Dame. “I didn’t know how many carries I was going to get and how many times I was going to be on the field. Every time I went out there, I gave it my all.”

Pederson said he liked what he saw from Adams as both and running back and a pass receiver. He said Adams is doing a good job of learning the offense.

“I thought he’s another one that ran extremely hard in the second half,” Pederson said. “Had some really nice runs around the ends. Just continues to grow. Continues to get better every day and stronger every day.”

In order to win that fourth running back spot, that’s the kind of strength these contenders will need.