Commentary: Not a Game 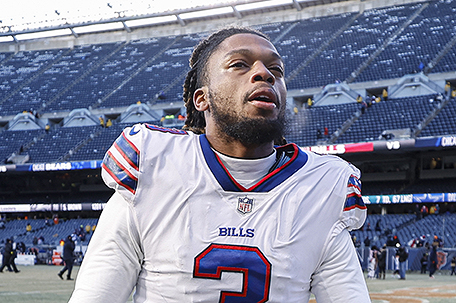 When Buffalo Bills star Damar Hamlin collapsed during the team’s Monday Night Football game against the Cincinnati Bengals, the players of the National Football League forced Roger Goodell into being a human.

Like many of you, I saw the highlights of Buffalo Bills Damar Hamlin going into cardiac arrest as paramedics frantically used CPR to revive him and heard the speculation about whether the NFL was going to order the players back on the field after Hamlin was taken to the University of Cincinnati Medical Center.

ESPN’s Monday Night Football play-by-play announcer Joe Buck told the New York Post he was told during the broadcast via rules analyst John Parry that the players were going to be back on the field five minutes after Hamlin was rushed to the hospital.

As I was watching this unfold and looking at the tears streaming down the faces of Hamlin’s Bills teammates, I thought there was no way that they were going to play this game with the thought of one of their own fighting for his life in the background. But I also saw Bengals quarterback Joe Burrow tossing practice passes as if the game was going to resume.

Meanwhile, Troy Vincent, the NFL’s executive vice president for football operations, denied the report in a conference call with reporters. The idea of resuming the game was out of the question.

“I’ve never seen anything like it since I’ve been playing,” said Vincent, who played with the Philadelphia Eagles from 1996 to 2003. “How do you resume play after you’ve seen such a tragic event occur in front of you in real time?”

But thanks to the agency of both the players and the head coaches—Buffalo’s Sean McDermott and Cincinnati’s Zac Taylor— and the NFL Players Association, NFL Commissioner Roger Goodell had no choice but to postpone the game.

If he didn’t, Goodell risked a public relations disaster of mammoth proportions, which is nothing new for them. From not monitoring concussions properly to using race as a criterion to determine chronic traumatic encephalopathy — or CTE — settlements, the NFL has invented ways of screwing up human, commonsense decisions.

The NFL and its corporate apparatus tried to destroy the career of Nigerian doctor, Bennet Omalu, the man who discovered CTE and its connection to concussions instead of using his research to help players. The league has also denied payments to African American players for concussions because they allowed doctors to assign lower baseline cognitive scores to Black players than their white counterparts when determining compensatory damages.

This is also the same NFL that didn’t take domestic violence seriously until a video of former Baltimore Ravens running back Ray Rice punching out his fiancé surfaced on TMZ and blackballed Colin Kaepernick despite paying lip service to systemic racism through performative gestures and slogans following the death of George Floyd.

It’s a shame that the only way for the NFL to truly care about the well-being of its players who risk career-ending and possibly life-ending injuries is when it generates bad publicity for the “Shield.”  Even as paramedics successfully revived Hamlin to get his heart beating, it took the NFL 30 minutes after the ambulance transported Hamlin to the hospital to decide that it really wasn’t a good idea to continue playing.

Whether it’s through columns like this or on my radio show on WURD, I have tried to explain to fans that the relationship between NFL players and owners is not your typical employer/employee relationship. It is a partnership between the fans that fill the stadiums and the owners that provide the facilities and money so that they can see the players, who do all the work and face all the danger.

Unfortunately, the mentality of the owners is that the players are property. To quote Nick Nolte’s character in the movie, “North Dallas 40”: “We’re (the players) not the team, they’re the team (owners), we’re the equipment, we’re the jock straps, the helmets … they depreciate us as part of their tax returns — that’s what that is.”

In that sense, the NFL is no different than any other American corporation that’s willing to work its employees to death, sometimes literally.

It might be time for us as Americans to ask ourselves how many Damar Hamlins we’re willing to see before we demand more from the “Shield” than platitudes.