Coach Brett Brown: The Sixers’ light at the end of a long dark tunnel of losses 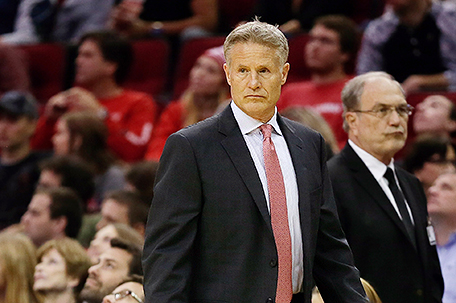 ABOVE PHOTO:  Philadelphia 76ers head coach Brett Brown looks on in the first half of an NBA basketball game against Houston Rockets on Friday, Nov. 27, 2015, in Houston. (AP Photo/Bob Levey)

With Joel Embiid and Ben Simmons finishing the remainder of the 2016-2017 season on the bench due to injuries, the one thing that Philadelphia 76ers fans should take away from this season is the ability of coach Brett Brown to mold a competitive team.

If fans outside of Philadelphia look at just the team’s losing 22-38 record, it’s easy to write the team off.

But if  you’ve been watching the team day and day out, you can see a glimmer of hope at the end of the horizon. For a while there, Sixers fans were able to say the phrase “playoff contender” with a straight face, especially when Embiid was putting up big numbers in the scoring column.

Despite the Nerlens Noel trade and the daily drama of Embiid’s status after his torn meniscus, Brown has managed to remain a steadying influence on a very young team that’s really only a few pieces (and a  few healthy players)away from being a playoff team. While he’s not a Coach of the Year candidate by any means, you have to admire how Brown has been able to pull this team together and get them to buy into his “process.”

Unlike the previous few seasons where the Sixers were tanking for NBA Draft lottery ping pong balls in the last month of the season,  you have a team that’s going to give you a good effort win or lose, regardless of who’s on the floor.

Before Wednesday’s night road loss to the Miami Heat, Brown said if the season were to end today that would be happy with the progress that the team has made throughout the season on both sides of the floor.

“We’ve said from day one that we’re not doing anything unless we play defense. That’s where our bread has to buttered, especially in a blue-collar city like Philadelphia,” Brown said.

Brown can point to the emergence of Embiid, who averaged 20.2 points, 2.5 blocked shots, and 7.8 rebounds per game while playing in just 31 games.  In nine out of his last 10 games, Embiid scored at least 20 points.  If the former Kansas star can stay healthy, he will be difficult to stop in both the low post and from the perimeter. Embiid shot 36 percent from three-point range.

The emergence Dario Saric was also a bright spot. Saric, who is averaging 11 points per game and is shooting 31 percent from three-point range, has improved his defensive game in addition to his offensive performance. The same thing can be said about guys like forward  Robert Covington and point guard T.J. McConnell.

“There’s a clear, identifiable style and development. It’s holistic, but it’s important to me,” Brown said. “When you look at the pieces under that. Look at what (Saric) has done, Look at what Covington has done, look at what (McConnell) and watch the growth of Richaun (Holmes)…I think that they’re getting better.”

Despite their record, the Sixers hardnosed style of play is garnering them some respect from around the league.  After they beat the 76ers Monday night at the Wells Fargo Center, Warriors players like Steph Curry said he was impressed with the young Sixers.

“They play hard,” Curry told Sixers.com. “They have some talent to work around, and hopefully they have some consistency with their roster going forward and getting guys healthy. One thing about them – you’ve got to compliment their energy and effort and fight every night that they play with.”

And Brett Brown’s coaching is a big part of that.