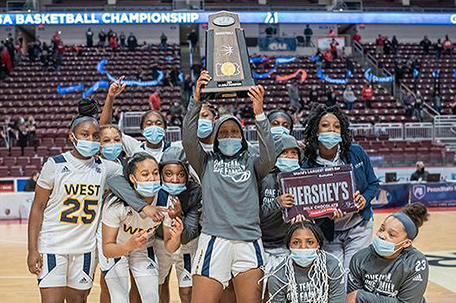 Last month, many women of the past, present and future were honored for their extraordinary achievements in politics, law enforcement, science, the arts, entertainment and sports. Many have faced challenges, but achieved greatly against the odds.

Now you can add another woman’s name to that list — Beulah Osueke.

On March 25, the West Catholic Lady Burrs defeated the Mohawk Lady Warriors, 67-56, to win the 2021 PIAA Girls’ Basketball 3A state title at the Giant Center in Hershey, Pennsylvania.

Eight years ago, Osueke accepted the West Catholic coaching position after she attended graduate school at LaSalle University.  From the beginning, she had a team of girls who wanted to play basketball but didn’t have the skills to succeed on the court. Gradually she built the team with hope and a prayer.

In Osueke’s first season, her team went 0-18. In the early years, she saw more losses than wins. But the team started getting better with much better players. She overcame the death of her basketball star guard Akyra Murray, who died in the Orlando Pulse nightclub mass shooting in 2016. Murray’s death sparked a fire in the school’s basketball program and the team has won games ever since.

West Catholic had gotten off to a bad start against the Mohawk Lady Warriors. They trailed 6-0 at the beginning of the first quarter. McPhaul started off slow. The senior guard made only six of her 17 shots in the game. However, Montgomery went 14 for 18 from the floor. She hit two treys to lead West Catholic’s offense attack. Montgomery hit a three-pointer from the right corner beyond the arc to get the Lady Burrs on the scoreboard.

West Catholic made a 13-6 run to lead the game16-12 at the end of the first quarter. West Catholic sophomore Amina Reid hit a three-pointer which gave the Lady Burrs a 19-13 lead to start off the second quarter. West Catholic extended their lead to 21-13 before the Mohawk Lady Warriors made a run to erase an eight-point deficit. The game was tied at 23-23 with about four minutes left in the first half.

This became a tight basketball game for both teams. They were playing tough defense. But then Montgomery made two baskets in a row and Eisha Walker added another one. That gave West Catholic a 29-26 lead at halftime.

In the third quarter, West Catholic switched up their defense. The Lady Burrs defended the middle and made it harder for the Mohawk Lady Warriors to score points inside the paint. They stretched their defense and forced Mohawk to shoot three-pointers from outside the arc. Osueke also ran a box-in-one defense to stop the Mohawks’ inside game. The West Catholic coach demanded her players to play tougher defense. She was often seen pounding up and down her bench.

The game got much tougher for the Mohawk Lady Warriors. They shot 7 for 20 from beyond the arc. However, in the third quarter, Mohawk managed to cut West Catholic’s lead to 39-35. But then West Catholic went on a 7-2 run that extended Lady Burrs’ lead to 46-37. At this point, Montgomery had scored 24 points. Before the third quarter ended, Mohawk had cut the lead with a three pointer. But West Catholic still held a 46-40 lead going into the fourth and final quarter.

In the fourth quarter, West Catholic continued to play tough defense. The Lady Burrs didn’t allow the Mohawk Lady Warriors to score inside the paint. Every time Mohawk tried to penetrate inside the paint, a West Catholic defender would be there to attempt to block the shot. With 2:06 left in the game, the Lady Burrs were leading the game, 60-51. Destiney McPhaul began to lead the team’s offense. She scored 12 points in the second half and helped West Catholic extend their lead. Despite Mohawk’s effort to stage a comeback, the Lady Warriors still came up short.

Ciani Montgomery was able to seal the deal after she knocked down two foul shots with 53 seconds left in the game.

When the final buzzer sounded, the West Catholic players exploded on the basketball court and staged a big celebration. Osueke got mobbed by her players. Getting caught up in the team celebration, she had tears of joy in her eyes.

This was the victory she always wanted.

“When I first became a head coach at West Catholic High, that was my goal to win a basketball state championship,”  Osueke said. “I wanted the state championship. That seemed more possible for me to achieve. It’s funny, I never thought I would win the Philadelphia Catholic League basketball title. I thought that would be much harder for me to do.”

The West Catholic players never stopped celebrating. When the team arrived back at the school campus, located at 45th and Chestnut Streets,  a big crowd welcomed them home as the 2021 PIAA 3A State Champions. Ciani Montgomery was named the game’s Most Valuable Player. After graduation, Montgomery will attend Lincoln University.

The West Catholic girls and Coach Osueke ended their basketball season on a great note — a successful championship season.