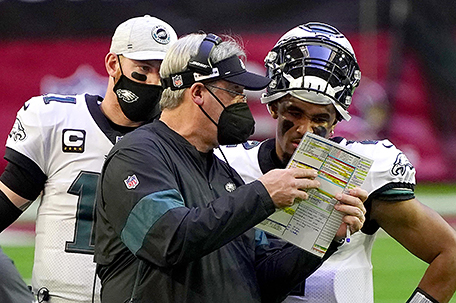 The Philadelphia Eagles are parting ways with their Super Bowl winning coach because Doug Pederson wanted more input on the menu.

The Philadelphia Eagles firing of coach Doug Pederson after a disastrous 2020 season where the team finished 4-11-1 harkened back to something that Hall of Fame coach Bill Parcells said after his departure from the New England Patriots in 1997.

“They want you to cook the dinner, at least they ought to let you shop for some of the groceries,” Parcells said.

In this case, team owner Jeffery Lurie wasn’t too happy with Pederson’s grocery list for the future direction of the team and announced that the team was parting ways with the coach that brought the franchise its first Super Bowl in February 2018.

The bottom line here is that there was a definite disconnect between what Pederson wanted for the Eagles and what Lurie and general manager Howie Roseman wanted for the team. In those situations, the house always wins. So, Pederson had to go.

“I would say the difference in vision is much more about where we’re at as a franchise. As I said, we’re at that point,” Lurie said on Monday. “It’s a transition point and we’ve got to get younger and we have to have a lot more volume of draft picks and we have to accumulate as much talent as we possibly can that is going to work in the long run with a focus on the mid-term and the long term and not on how to maximize 2021.”

Lurie and Roseman want to do a long-term rebuild of the team in their own image, and at this point it’s doubtful that even they know what that looks like.

The reality is that the Eagles were a rudderless team in 2020 with a boatload of problems that weren’t all on Pederson. Lurie’s comments show that coaching staff and the front office really were not on the same page as several media outlets have reported.

If you’re trying to build a perennial Super Bowl contender, the front office and the coaches on the field have to be on the same page. Wasn’t that the complaint about former Eagles head coach Chip Kelly, who supposedly outmaneuvered Roseman in terms of making personnel decisions?

A disconnect between a front office and the coaching staff makes for a dysfunctional situation for a team and it never ends well. The Eagles were apparently a hot mess in that regard.

For starters, it has been reported Pederson had assistant coaches that were forced on him by a Roseman-led front office. Roseman, for his part, has also done a poor job of evaluating talent and made some horrific draft choices like cornerback Sidney Jones, who was hurt the day they drafted him. Offensive tackle Andre Dillard, the team’s No. 1 draft choice in 2019, spent the year on injured reserve.

In the second round of the 2020 draft, the Eagles inexplicably picked former Oklahoma star Jalen Hurts after giving a boatload of money to Carson Wentz. As much as I think Hurts has the potential to be a solid starting quarterback in the league, this pick had me scratching my head because the Eagles had more important needs at other positions, most notably linebacker and offensive line.

From what I understand, Pederson supposedly wasn’t on board with the decision to draft Hurts, and although he said all of the right things on Draft Night, Wentz wasn’t a big fan of the pick either.

Between injuries and poor play by Wentz, the Eagles descended into the abyss. On offense, there were too many offensive people in Wentz’s ear between senior offensive assistant Rich Scangarello and passing game coordinator/quarterbacks coach Press Taylor.

All of the aforementioned things made for a horrible 2020 season that inevitably resulted in the feeling that Pederson and the organization were heading in different directions.

Now that Pederson is gone, the Eagles are hoping that Wentz is open to staying with the team with a new coach that can help him return to his MVP form of 2017. Good luck with that.

But the Eagles have so many problems on both sides of the ball including an offensive line that had more than a dozen different lineups and a defense that is getting old and in desperate need of linebackers that can consistently make plays.

The Eagles fired Kelly with one game left in the 2015 season because of his lack of emotional intelligence. Eagles fans should hope that Roseman and Lurie would have the emotional intelligence to let their next head coach have more meaningful input on the players and coaches he brings to the team.

There’s nothing wrong with letting the cook shop for his own groceries.