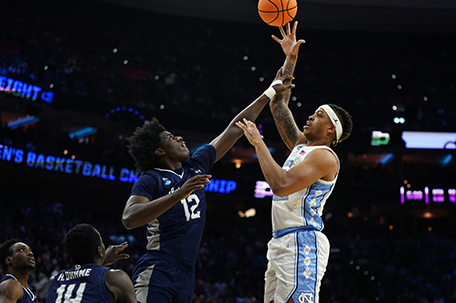 ABOVE PHOTO: North Carolina’s Armando Bacot, right, goes up for a shot against St. Peter’s Clarence Rupert during the first half of a college basketball game in the Elite 8 round of the NCAA tournament, Sunday, March 27, 2022, in Philadelphia. (AP Photo/Chris Szagola)

When St. Peter’s freshman forward Clarence Rupert was a little boy growing up in North Philadelphia, he dreamed of coming to the Wells Fargo Center to see his idol, 76ers Hall of Famer Allen Iverson.

Throughout his childhood, Rupert never saw a Sixers home game in person. By the time he was 12, his family moved to Virginia, and the only time he made it home to Philadelphia was to play AAU basketball during the summer.

But when he finally made it to the Wells Fargo Center, Rupert’s visit was a memorable one, not just for him, but also for fans of NCAA Tournament Cinderella stories. He was a part of No. 15 seed St. Peter’s run to the Elite Eight in this year’s tournament, which was played at the Center  last weekend. In last Friday’s win over Purdue, Rupert experienced the cheers from the crowd the way that his hero Iverson once did.

“The feeling was amazing definitely,” he said. “Knowing that it was my first time playing here. “Me playing in here is just a blessing. … I never thought I’d make it back here to play in the Sweet 16 and the Elite Eight. It’s been a long ride. I never saw myself getting this far.”

“For Clarence to come back home is tremendous for him,” Holloway said. “He’s super happy. I’m happy for him.”

In St. Peter’s 67-64 upset of Purdue in the East Regional semifinal last Friday, it was Rupert who set the tone early in the first half and got the Peacocks into a good rhythm. He scored 11 points, including St. Peter’s first seven points of the game.  Rupert also pulled down three rebounds, blocked two shots, and had three steals.

“He was huge for us in (Friday’) game (against Purdue). His presence down low is amazing,” said St. Peter’s guard Matthew Lee.  “He did a great job defensively as well as offensively, obviously getting us into a rhythm with those early points.”

Rupert said what made that Friday night’s win special was that about 20 people including his mother, Makisha Banks among the throng of 20,000 or so fans gathered at the Wells Fargo Center. Spotting his mother in the audience was special to Rupert.

“My mom couldn’t make it to any of my games this whole season and I didn’t get to talk to her before the game or even after the game,” Rupert said. “I looked up in the crowd and saw my mom she dropped a couple of tears and with my whole family looking at me. I just knew I had to perform well. It was a blessing. … My mom was a major part of me getting here. … Looking at her in the crowd really brightened up my eyes –I was just excited to see her. ”

Equally as improbable as St. Peter’s run to the Elite Eight was Rupert getting a Div.I scholarship. During his senior year at the Miller School of Albermarle, a boarding school located in Charlottesville, Va., he was an All-State selection and was offered a scholarship at Murray State.

Then the pandemic happened during Rupert’s senior year in 2020-2021 and Murray State rescinded the offer because they couldn’t see him play. But then Rupert got a call from Holloway who made him an offer that he would not ultimately refuse.

“Coach Holloway called me and said, ‘We’ve seen you play, we’re going to offer you a scholarship. We like how hard you play. You’re a gritty player, I see that you’re hungry,” Rupert said. “We automatically clicked once we got on that phone.

Rupert fits the prototype player unpolished gem that Holloway looks for in the players he recruits.

“I like to recruit, guys that are underrecruited, have a chip on their shoulder with something to prove, tough, hard-nosed kids, tough-minded,” Holloway said. “I’m a coach that really gets after my guys, so you’ve got to be a tough kid and tough-minded to play for me.”

One of the things that got the 6-foot-8, 245-pound Rupert ready to play at the collegiate level was spending his summer in Philadelphia playing with the Philly Pride AAU team.

“It’s not easy growing up in Philly — you face a new challenge every day,” Rupert said. “Me growing up here. (St. Peter’s) getting in this moment now, I’m just like I’m built for this. I’m really showing no fear. I have no fear. I’m undersized. I’m playing against seven-footers. I’m battling every night. It’s been a challenge. There’s really no fear in me.”

The underdog Peacocks run through to the NCAA Tournament saw them topple perennial giants like No. 2 seed Kentucky, No. 7 Murray State—the school that rejected him, and no. 3 Purdue.  Despite the loss to North Carolina, Rupert said his greatest memory of St. Peter’s journey through the tournament was the camaraderie he shared with his teammates.

“It was just playing with his group of guys. … know that KC (Ndefo) is a senior. It’s been awesome having this group as a team,” said Rupert, who scored just two points in the loss to North Carolina. “Coming back to Philly was a major part of it.”