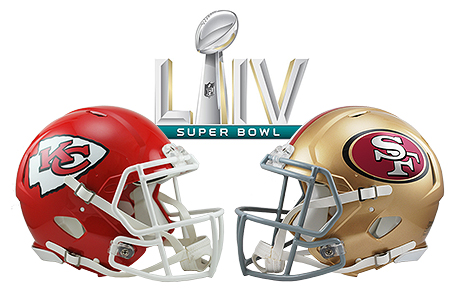 Super Bowl LIV could be a true heavyweight fight.

For the Philadelphia Sunday SUN and the Chris Murray report

Whenever someone asked him about matchups in a boxing match, the late boxing writer Bert Sugar would often answer that question by telling folks  “styles make fights.”

That’s probably the most accurate description of Sunday’s  Super Bowl LIV matchup between the San Francisco 49ers and the Kansas City Chiefs in Miami. If you wanted to use a boxing analogy to describe these two teams, they are as different as Muhammad Ali and Joe Frazier.

If you’re a fan of a high-energy passing attack and a quarterback that most would argue was on the precipice of greatness, you’ll love  the Kansas City Chiefs, who, led by quarterback Patrick Mahomes, are simply looking to continue their run of  outscoring their opponents.

With several speedy receivers and one of the league’s most reliable tight ends at his disposal, Mahomes has been unstoppable. In the Chiefs two postseason games leading up to Super Bowl LIV, Mahomes has thrown eight touchdown passes while averaging over 300 yards per game.

But even more than his stats, Mahomes has done a remarkable job of picking up his team off the mat when they’ve fallen behind. In their AFC Divisional playoff matchup against the Houston Texans, the Chiefs were down 24-0 and seemingly headed for the brink of elimination, but Mahomes threw five touchdown passes and led the Chiefs to 51 straight points.

In the AFC Championship game against the Tennessee Titans, the Chiefs fell behind 17-7. And once again, Mahomes brought the Chiefs back by throwing three touchdown passes and running for another.  Perhaps the most important play in Kansas City’s run to the Super Bowl was Mahomes 27-yard touchdown run in which he ran past two Titans and did a spin move on two others to get into the end zone and put the Chiefs ahead for good.

The 49ers defense will have their hands full trying to defend Kansas City’s weapons like tight end Travis Kelce and speedy wide receivers Tyreek Hill and Sammy Watkins. The Chiefs can also run the football with Damian Williams, who is averaging 4.5 yards per game. They will also have former Eagles running back LeSean “Shady” McCoy, who gained 465 yards this season and will get his share of carries in Sunday’s game.

But San Francisco’s defense has been dominant during their run through the NFC in both the regular season and the playoffs.  The 49ers’ are arguably the best defense the Chiefs will face this season, especially in the passing game.

The 49ers led the NFL in yards against the pass, allowing just 169 yards per game. They are good at getting to the quarterback and were tied for fifth in sacks with 48. The strong suit of this 49ers squad is their front-four led by defensive ends Nick Bosa, the NFL’s Defensive Rookie of the year, who had nine sacks during the regular season and Arik Armstead, who led the 49ers in sacks with 10.  In the middle of the 49ers defense is defensive tackle DeForest Buckner, who had seven sacks during the regular season.

The question is whether that 49ers line can generate enough of a pass rush to keep Mahomes and the Chiefs off balance. In the secondary, the 49ers have veteran quarterback Richard Sherman possibly going up against the speedy Tyreek Hill.

Running back Raheem Mostert gashed the Packers for 220 yards and four touchdowns in the NFC title game. As a group, the 49ers gained 285 yards on the ground. Against the Minnesota Vikings a week earlier, the 49ers, led by Tevin Coleman’s 103 yards, rushed for 186 yards.

The 49ers will be matched up against a Kansas City defense that ranks 25th against the run and allows 118 yards per game. The 49ers have to control the ball on the ground to keep the Chiefs off the field.

Seemingly overshadowed by the success of the running back has been quarterback Jimmy Garappolo, who hasn’t had to put the ball in the air too much during the 49ers run to the Super Bowl. He passed for just 77 yards on 6-of-8 passes.

But Garoppolo can put the ball in the air and has a receiving corps that’s just as good as Kansas City’s. At the tight end spot, the 49ers have George Kittle, arguably the best tight end in the NFL. During the regular season, Kittle had 85 catches for 1,053 and five touchdowns. If you’re preoccupied with Kittle, you have Deebo Samuel and Emmanuel Sanders.

The obvious thing in this game is that somebody has to impose their will. For the Chiefs to win this game, they have to get out fast and early to force the 49ers to abandon their run game. While the Chiefs have managed to overcome deficits, the 49ers have a very physical defense and might not fall apart if the team gets a big lead. This is a defense that shut  Aaron Rogers down, not once, but twice.

On the other hand, the 49ers have to occupy the ball and score touchdowns to keep the high-powered Chiefs off the field.

Prediction:  This is going to be a chess match. Both offenses will have their moments, but in the end, I think this is Mahomes’ time and he will make enough clutch plays to put Kansas City on top. Chiefs 27, 49ers 24.

You can catch Super Bowl LIV on Fox-29 here in Philadelphia. The game kicks off at 6:30pm.