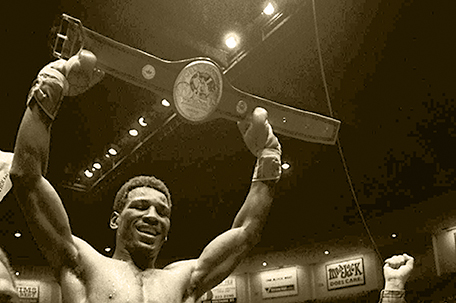 ABOVE PHOTO:  Matthew Saad Muhammad holds up his light heavyweight title belt as he is carried around the ring after knocking out challenger Lotie Mwale in their title fight in San Diego in 1980. Matthew Saad Muhammad, who was abandoned as a child and rose to become “one of the most exciting boxers of all time” and later an advocate for the homeless after a stay in a shelter himself, died Sunday, May 25, 2014 at a Philadelphia hospital. He was 59.  (AP Photo/File)

Former light heavyweight champion Matthew Saad Muhammad, who was abandoned as a child and rose to become “one of the most exciting boxers of all time’’ and later an advocate for the homeless after a stay in a shelter himself, has died. He was 59.

Saad Muhammad died Sunday at a Philadelphia hospital, said Kevin Roberts of the nonprofit Resources for Human Development, which Saad Muhammad worked with in recent years.

“He had a lot of ups and downs – like life,’’ said longtime friend Mustafa Ameen.

In 1977, in just his 21st pro fight, Matthew knocked out veteran Marvin Johnson in the 12th round to win the North American Boxing Federation light heavyweight crown. He defended that title three times. He then fought Johnson for the World Boxing Council title in 1979 in Indianapolis, scoring a knockout despite cuts above both eyes in an eighth round named Round of the Year by The Ring magazine.

He defended his world title eight times, seven of them by knockout, before losing the crown in 1981 to Dwight Muhammad Qawi in a 10th-round knockout. He retired in 1992 with a 39-16-3 record and was inducted into the International Boxing Hall of Fame in 1998.

Flags will fly at half-staff in Saad Muhammad’s memory, the organization announced.

“Saad Muhammad was one of the most exciting boxers of all time. His drama-filled fights were thrilling, and he was a real fan favorite,’’ executive director Edward Brophy said in a statement. “We join the boxing community in mourning his passing.’’

Saad Muhammad was born in 1954 in Philadelphia and lived with an aunt, but was abandoned on the street at age 5 when the family could no longer take care of him, he had said.

“A different relative took me out in the city where I wouldn’t know where I was or how to find my way home, and ran away from me,’’ he wrote in One Step Away, a newspaper produced by residents of Philadelphia shelters. “I was alone on the streets. I was so scared. A policewoman found me, and asked me my name. I told her I didn’t know my name.’’

Taken in by Catholic nuns who named him Matthew from the Bible and Franklin because was found on Philadelphia’s downtown Benjamin Franklin Parkway, he said he found his calling in a boxing gym in south Philadelphia and started his pro career in 1974, just three years before he won the NABF title.

Shortly after becoming champion, he converted to Islam and changed his name to Matthew Saad Muhammad.

Years ago, Saad Muhammad became homeless and took refuge in a Philadelphia shelter but rebounded and had a home when he died, The Philadelphia Inquirer reported. He also became an advocate for the homeless.

“He did a lot of great work for the cause of homelessness in Philadelphia,’’ said Roberts.

Ameen said that not only should Saad Muhammad’s fierce fighting style be remembered but also his determination to rise above his circumstances outside of the ring.

“He had a tremendous heart as a fighter, as a professional boxer,’’ Ameen said. “He refused to quit when the odds were against him, and I think that kind of summarized his entire life.’’