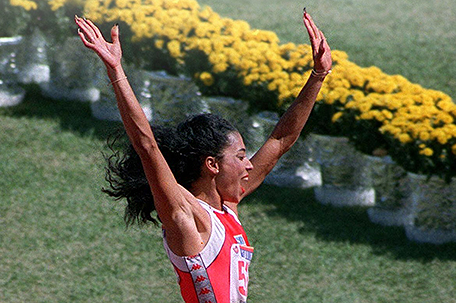 ABOVE PHOTO:  Florence Griffith Joyner raises her arms in victory as she wins the women’s 100-meters final at the Seoul Olympics, in this Sept. 25, 1988 photo.   (AP photo/Eric Risberg)

Florence Delorez Griffith Joyner (December 21, 1959 – September 21, 1998), famously known as Flo-Jo, was an American track and field athlete. She is considered the fastest woman of all time based on the fact that the world records she set in 1988 for both the 100 m and 200 m still stand and have yet to be seriously challenged. She died in her sleep as the result of an epileptic seizure in 1998 at the age of 38. She attended California State University, Northridge (CSUN) and University of California, Los Angeles (UCLA).

Griffith was born in Los Angeles, California, and she was raised in the Jordan Downs public housing complex. During the late 1980s she became a popular figure in international track and field because of her record-setting performances and flashy personal style. She was the wife of the triple jumper Al Joyner and the sister-in-law of the heptathlete and long jumper Jackie Joyner-Kersee.

Griffith ran track at Jordan High School in Los Angeles. As a senior in 1978, she finished sixth at the CIF California State Meet behind future teammates Alice Brown and Pam Marshall. Griffith attended the California State University at Northridge, and she was on the track team coached by Joyner-Kersee’s future husband, Bob Kersee. This team also included her teammates Brown and Jeanette Bolden. However, Griffith had to drop out in order to support her family, and then she took a job as a bank teller. Kersee was then able to find financial aid for Griffith and she returned to college. Brown, Bolden, and Griffith qualified for the 100-meter final at the trials for the 1980 Summer Olympics (Brown winning, Griffith last in the final). Griffith also ran the 200 meters, narrowly finishing fourth, a foot out of a qualifying position. However, the U.S. Government had already decided to boycott those Olympic Games mooting those results.  After the season Kersee became the head coach of the track team at the University of California at Los Angeles, which prompted Griffith to also transfer there, since she was academically eligible to do so. In 1982, Griffith graduated from UCLA with her bachelor’s degree in psychology.

Griffith finished fourth in the 200 meter sprint at the first World Championship in Athletics in 1983. The following year she gained much more attention, though mostly because of her extremely long and colorful fingernails, rather than the silver medal that she won in the 1984 Summer Olympics. In 1985, she won the 100-meter IAAF Grand Prix Final with the time of 11.00 seconds. After the 1984 Olympic Games, she spent less time running, and she married the Olympic triple jump champion of 1984, Al Joyner, in 1987.

Upon returning at the 1987 World Championships, Griffith Joyner finished second again in the 200 meter sprint.

In 1988, with no outstanding early season marks to indicate fitness, in the first race of the quarterfinals of the U.S. Olympic Trials, she stunned her colleagues when she sprinted 100 meters in 10.49 seconds, the world record. Several sources indicate that her race was most likely wind-assisted. Although at the time of the race the wind meter at the event measured a wind speed of 0.0 meters per second (no wind), some observers who were present noted evidence of significant winds, and wind speeds of up to 7.0 m/s were measured at other times during the track meet. The previous race on the track was measured at +5.2, and while the second quarterfinal was also 0.0, the third quarterfinal was +4.9.

Since 1997 the International Athletics Annual of the Association of Track and Field Statisticians has listed this performance as “probably strongly wind assisted, but recognized as a world record”. Besides this one race, Griffith Joyner’s fastest wind-legal time in this sprint was 10.61 seconds, which would also be the unbroken world record.

By now known to the world as “Flo-Jo”, Griffith Joyner was the big favorite for the titles in the sprint events at the 1988 Summer Olympics. In the 100-meter final, she ran a wind-assisted 10.54, beating her nearest rival Evelyn Ashford by 0.30 seconds. In the 200 meter semifinal, she set the world record of 21.56 seconds, and then she broke this record again in winning in the final by 0.38 seconds with her time of 21.34 seconds.

In 1996, Griffith Joyner appeared on Charlie Rose and announced her comeback to competitive athletics, only this time to concentrate on the 400-meter run. Her reason was that she had already set world marks in both the 100 m and 200 m events, with the 400 m world record being her goal. Griffith Joyner trained steadily leading up to the U.S. Olympic trials in June. However, tendonitis in her right leg ended her hopes of becoming a triple-world-record holder. Al Joyner was to also attempt a comeback, but he too was unable to compete due to an injured quadriceps muscle.

Griffith Joyner was also an artist and painter. Her work has been on display as part the Art of The Olympians (AOTO). She is one of two posthumous members of AOTO, the other being the founder and Olympian, Al Oerter.