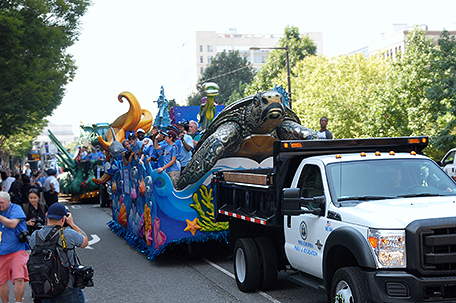 ABOVE PHOTO:  Philly’s Taney Dragons Little League team are celebrated during the parade given in their honor down Broad St last week.  The Dragons were the first team from Philadelphia to go to the Little League World Series during its 75th anniversary this year.  (Photo by Bill Z. Foster)

A lot of people who would normally be hard at work in their Center City offices were instead gathered on the streets of Philadelphia in support of the Taney Dragons Little League team as part of a parade honoring the Mid-Atlantic Little League champions Wednesday.

Waving signs that said, “We Love Taney,”  “We’re on the Dragon Wagon,” and “Let’s Go Taney,” a crowd of thousands took part in the parade, which also featured performances by the Philly POPS orchestra in front of the Kimmel Center and the Mummers at Broad and Washington.

In the midst of a tumultuous summer on the streets of Philly and around the world, the Dragons, a multi-ethnic team of 12 and 13-year-olds, gave everyone something to smile about during their Little League World Series run in Williamsport, Pennsylvania, said Mayor Michael Nutter.

“We’ve had a number of tragedies this summer just in Philadelphia involving children, very tragic situations, so we mourn all of those losses and it really hurts our heart when bad things have happened to our children,” said Nutter said. “To have a few weeks, a month or so of this kind of incredible joy around children just playing a game, just having a good time, I think it was really exciting for the whole city and people responded.”

The Taney Dragons were one of two inner city teams to play in the LLWS, and the first from Philadelphia. They, and the U.S. Champion Jackie Robinson West team from Chicago, became favorites of fans around the country and garnered a lot of media attention in the process.

Taney manager Alex Rice applauded his kids for how they’ve handled it. 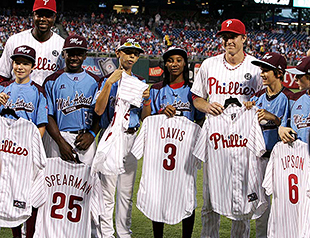 PHOTO: The Dragons are gifted with Phillies’ uniforms with their names on them at Citizens’ Bank Park after the parade. In the photo are some of the members of the Dragons including Zion Spearman, Jared Sprague-Lott, Mo’Ne Davis and Erik Lipson with Ryan Howard and Chase Utley.

“It was an honor to be associated with this team for the past two months,” Rice said. “They’re talented, wonderful, high character, smart, funny wonderful kids. They played terrific baseball.”

Though the Taney Dragons finished third, they received a heroes’ welcome from a grateful hometown on Wednesday in a parade that went from downtown to Franklin D. Roosevelt Park in South Philadelphia.

“The parade was awesome,” said Taney Dragons slugging outfielder Zion Spearman. “I wish we had another one, but this was awesome. I think it was nice seeing all the people. It was fun.  It was pretty good because it was, I don’t know, exciting.”

After marching down Broad Street, Mayor Nutter and Second District City Councilman Kenyatta Johnson honored the team with a proclamation and announced plans provide more resources to recreation programs in the city and repair the city’s baseball fields.

Later in the day, the team went to Citizens Bank Park where the Philadelphia Phillies honored them and let entire team threw the ceremonial first pitch.  They also got some encouragement from Phillies first baseman Ryan Howard, who spent time with them in Williamsport.

“This is the epitome of Philadelphia right here,” Howard said during the ceremony.  “I felt like a little kid when I was hanging out with these guys. They were full of life and full of energy and just plain fun.”

For the kids, it has been a whirlwind last couple of weeks with games and celebrations. This is especially true for 13-year-old pitcher Mo’ne Davis, who thrilled fans and dazzled with her 70-mile per hour fast ball and became the darling of the Little League World Series.

Davis was the toast of the morning TV talk shows including ABC’s Good Morning and became the first Little Leaguer to grace the cover of Sports Illustrated. By the time the parade ended, a visibly-tired Davis talked to reporters about the run through the Little World Series.

“It’s been half and half. I like it sometimes, but most of the time I don’t. I’m looking forward to school,” Davis said. “What sticks out to me is being on (the cover) of Sports Illustrated, throwing my shutout and making it to Williamsport.  … It was very cool.”

The solid of performance of both the Taney Dragons and the all-Black U.S. champion Chicago Jackie Robinson West squad marked the comeback of urban baseball.  The Taney Dragons squad was a multi-ethnic squad that looked more like America.

“I ran with my kids from Philadelphia, they were a perfect cross section of Philadelphia and I was thrilled with the talent that made the team and I loved them,” said manager Alex Rice.