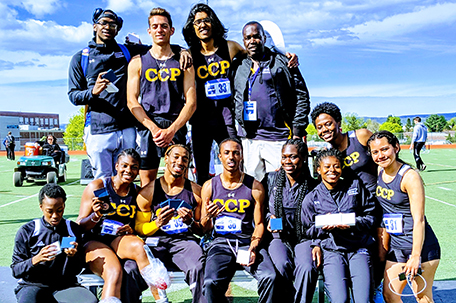 Eleven track and field athletes from Community College of Philadelphia captured All-America honors for the 2019 NJCAA Division III Outdoor Track & Field season, according to the U.S. Track & Field and Cross Country Coaches Association (USTFCCCA), which has released the names of honorees.

These student athletes, many of whom have practiced two hours a day, four to five times a week during the fall and the spring semesters, earned USTFCCCA All-America honors by virtue of finishing among the top-8 of their respective events at the 2019 NJCAA Division III Outdoor Track & Field Championships held in May in Utica, New York.

Many of the CCP athletes participate in Cross Country meets in fall and then prepare for track and field in the spring. “They work really hard,” said Robert Taylor, who coaches the men’s and women’s track and field teams and cross-country team at CCP. “They begin as early as August and practice two hours per day, averaging four days a week. This is a very big commitment for these commuter athletes. They don’t live on campus, so they have to commute. A lot of them also have jobs.”

So why do they put up with a grueling schedule? Taylor, a former CCP track star himself, says athletes gain a competitive advantage and gain mental toughness. “They love the sport. They love competing and they love working together as a team,” he said.

In addition, on May 16, Ringgold was named the Eastern Pennsylvania Athletic Conference Athlete of the Week. Region XIX. Ringgold lead the men’s track and field team who entered the NJCAA Championship meet ranked 16th (out of 28) by the USTFCCCA. The men’s team surpassed expectations and finished in 8th place.

In addition, Jamail Khan, who is a participant in CCP Honor’s program in addition to being a student athlete, has been admitted to Swarthmore College.