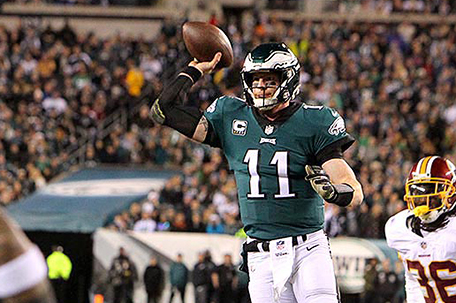 Carson Wentz is sidelined with a back injury, but two people familiar with the situation tell The Associated Press the quarterback hasn’t been ruled out for Philadelphia’s game at the Los Angeles Rams on Sunday.

Both people spoke on condition of anonymity Wednesday because the team hasn’t made any definitive determination.

Pederson said the problem isn’t a result of a hit or anything that happened in the last game, a 29-23 overtime loss at Dallas that dropped the defending Super Bowl champions to 6-7.

“Nothing game related,” Pederson said. “He’s dealt with it, and so we’re going to continue to evaluate.”

Super Bowl MVP Nick Foles would start if Wentz can’t play. Foles hasn’t taken a snap since Week 2 but is taking reps with the first team in practice.

Wentz tore two ligaments in his left knee last Dec. 10 and missed the first two games this season. Foles replaced him and led Philadelphia to its first NFL title since 1960.

He was injured a few plays before tossing his fourth TD pass of the game in a victory at the Rams last year. Foles stepped in and helped the Eagles rally from a 35-31 deficit to beat Los Angeles and clinch the NFC East title. Foles then led the Eagles to wins at the Giants and over Oakland to help the team secure the No. 1 seed in the NFC.

Foles was outstanding in the NFC championship game against Minnesota and the Super Bowl against New England.

Foles is 21-12 as a starter, including playoffs, in two stints with Philadelphia. The Eagles were 1-1 in Foles’ starts this season.