Carrying Their Own Baggage 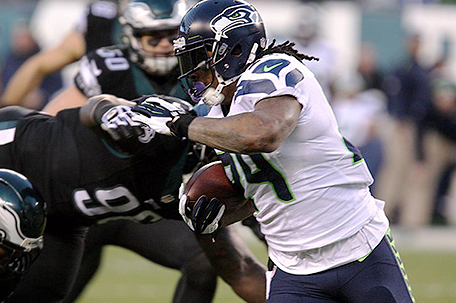 ABOVE PHOTO:  When Marshawn Lynch has the ball, he can do a lot of damage. He hopes to do that against the New England Patriots in Super Bowl XLIX.  (Photo by Webster Riddick)

If you’ve had enough of the hot air surrounding the “Deflate-Gate scandal, but still have a taste for the quirky and bizarre of Super Bowl XLIX in Glendale, look no further than Seattle Seahawks running back Marshawn Lynch and his fellow ball carrier LeGarrette Blount of the New England Patriots.

While Lynch and Blount will be key components in the game plans of their respective teams on Sunday at University of Phoenix Stadium, a lot of focus has been placed not on their ability to carry the ball, but on the baggage—Lynch’s refusal to talk to the media and Blount’s unceremonious kick to the curb from the Pittsburgh Steelers– they drag with them as they do it.

Not since Dallas Cowboys running Duane Thomas’ gave his famous “What time is it” line to reporters in the buildup to Super Bowl VI in 1972 has a running back’s words made the kind of headlines that Lynch’s “I’m here so I won’t get fined” did.

During the Seahawks Media Day session on Tuesday, Lynch kept repeating that line over and over again during a strange, yet amusing three and a half-minute confab with more than 200 reporters. According to the NFL Network, Lynch chanted the sentence 29 times.

Lynch’s aversion to press availabilities and how it manifests itself has become the stuff of legend. From the one-liners he delivered during the regular season that cost him $50,000 in fines to the complaints filed by the Pro Football Writers Association for his refusal to talk to reporters during last year’s Super Bowl Media Day, Lynch has figuratively grabbed his crotch when it comes to the League’s mandated press conferences.

And speaking of crotch grabs, the NFL has warned the Seahawks that if Lynch decides to do that after scoring a touchdown, the former Cal star’s antics would cost them 15 yards for unsportsmanlike conduct each time. It’s already cost Lynch a grand total of $31,050 ($20,000 for doing it during the NFC title game and $11,050 for a regular season game in December.)

Lynch’s Seahawks teammates say that he should be able to handle his media duties his own way, but several prominent members of the media Lynch for not following the league rules and not promoting the game that pays him.   That’s a good point.

Oddly enough, Lynch’s Media Day Theatre of the Absurd might have actually done more to promote the game, something that the NFL probably doesn’t want to admit. No one wants to admit that anti-heroes and knuckleheads make the game as intriguing as the game’s superstars, especially in a year where the League has endured a lot of bad press.

For all his public misbehavior, Lynch’s teammates and coaches benefit from the damage he does on the field when he’s in “Beast Mode.” During the regular season, he gained 1,306 yards with 13 touchdowns. He also gained 157 yards on 25 carries in the NFC Championship Game against the Green Bay Packers and scored the go-ahead touchdown late in the four quarter. He’s also a leader in the locker room.

“Obviously, he’s a little different with us than he is out in public, but he’s a great guy,” said Seahawks offensive coordinator Darrell Bevell. “He works hard in the meeting room in the meeting room with those guys (running backs) to help prepare them.”

But while Lynch’s shenanigans tend to anger Seahawks beat writers, Blount’s angered Steelers coach Mike Tomlin. Blount expected to be a bigger part of the Steelers offense, but with the emergence of Le’Veon Bell, his playing time was reduced. Blount had just 266 yards rushing in 11 games. A few minutes before the end of the Steelers win over the Tennessee Titans on Nov. 17, Blount decided he had enough of being Bell’s backup and walked off the field before the game was over.  By the time the rest of the team got to the locker room, Blount was headed for the team bus.

Head coach Bill Belichick, remembering how well Blount played for the team in 2013, took him back immediately. While most coaches might have shied away from him because of how his time in Pittsburgh ended, it didn’t matter to him, he said.

“Yeah, I don’t know anything about Pittsburgh, you’d have to ask Pittsburgh about Pittsburgh,” Belichick said.  “I think he’s been a good addition to our team, very popular guy in the locker room. He’s good for our team and he’s a good player, so it worked out well.”

Blount has paid dividends. In five games for the Pats in 2014, Blount gained 281 yards. In the AFC Championship game against the Indianapolis Colts, Blount gained 148 yards on 30 carries and scored three touchdowns.

Blount’s return to the Patriots energized his teammates.

“I felt like it was almost like he never left once we got going,” said Patriot running back Shane Vereen.

And in the end, leaving the Steelers was a good thing for him, Blount said.

“Things didn’t work out as planned, so we had to part ways and I ended up here,” he said. “And now I’m about to play in the Super Bowl.”

Belichick has a knack for finding talented players with baggage and Blount is no exception. He was suspended much of his senior year at Oregon for punching a Boise State player after his Ducks lost their 2009 season-opener. In his first training camp with the Steelers, he and, ironically enough, Bell, were arrested on possession of marijuana charges. Blount will be in a Pittsburgh courtroom on Feb. 4, hoping to have those charges dismissed.

Lynch and Blount may have their share of personal issues with authority, but they help their teams win. During Media Day, Blount said Lynch shouldn’t change a thing about himself.

“Whatever he’s doing, I recommend him to keep doing it because he’s been successful in this league at it,” Blount said.