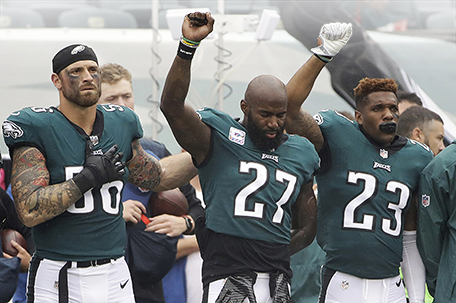 I get what Philadelphia Eagles safety Malcolm Jenkins hopes to gain by taking $89 million from the NFL. But I hope that he doesn’t get burned.

To a lot of African-Americans that support the cause of former San Francisco 49ers quarterback Colin Kaepernick, the recent decision by Philadelphia Eagles safety  Malcolm Jenkins to accept a settlement of $89 million over seven years from the owners amounts to selling out the cause.

While the money, which will reportedly go to social justice causes, didn’t have the string of ending the protests attached, Jenkins decided to end his personal protest during the National Anthem shortly after the deal was announced, something that drew the ire of many.

Players like San Francisco 49ers safety Eric Reid, a powerful voice within the Players Coalition that  Jenkins is a part of, objected to the deal, calling it a “charade.” Kaepernick, who reportedly hasn’t spoken to Jenkins except through his attorneys, was also not amused.

Additionally, Reid told Fox-Sports 1 talk-show and former NFL player Shannon Sharpe that league owners wanted no part of Kaepernick as a face of the movement, and that Jenkins wasn’t authorized to talk to the owners on the Players Coalition’s behalf in the first place.

On the surface, it’s easy to say that the NFL bought the silence of Jenkins and the Coalition with that settlement. When you throw in the fact the some of the NFL’s contribution is going to come from money that goes to Breast Cancer Awareness and various veterans’ and military  groups and military causes, there’s a lot of room for skepticism on the part of Reid and others.

And since money is being taken from those groups, you know that’s going to raise the ire of some white fans who still view the protest as a temper tantrum waged by spoiled Black millionaires.

By taking money from established causes to create this settlement, the NFL has made the problem worse, Sharpe said.

“The military is already upset because they think you’re protesting them,” Sharpe said. “Now you’re taking that which was deemed for them.”

To be honest, I can understand why Reid and some of the other folks leaving the Players Coalition have an issue with this settlement. The history of the NFL includes a“shield” that’s been covered in dirty deeds that weren’t done dirt cheap.

For example, when former Baltimore Colts tight end John Mackey organized the first players strike in 1970 to get better pension and death benefits for players, the league fought tooth and nail against his efforts, efforts that led to the NFL Players Association.

As Mackey tried to fight for those rights, the NFL owners tried to use the impending death of Vince Lombardi to manipulate Mackey and the players into giving up their demands, going so far as to use the league’s powerful public relations machine to try and pin Lombardi’s death on Mackey, which was absurd.

Mackey was abruptly traded from the Colts to the San Diego Chargers three years later and didn’t get into the Hall of Fame until his final year of eligibility despite credentials that made him a lock for the honor. It was widely speculated that his union activity had something to do with it.

Abner Haynes, the man who led the successful boycott of the 1965 AFL All-Star game due to racism in New Orleans was ultimately traded by the Kansas City Chiefs and told in no uncertain terms that his anti-racism activism was unacceptable.

In recent years, the NFL has done everything it can to discredit Dr. Bennet Omalu, the doctor that  discovered Chronic-Traumatic Encephalopathy — or CTE — a brain disease that results from an accumulation of blows to the head that come from playing football.

Like I said, I get the mistrust. The  settlement doesn’t address the plight of Kaepernick, who is still without a job and has filed a grievance charging the owners with collusion.

But I don’t necessarily think that  Jenkins is a sellout. He’s honestly sincere about the cause and is on the same page as the people against the settlement. He’s testified before Congress and state legislatures regarding social justice for African-Americans and against police brutality.

You can also argue that it was an accomplishment to get anything out of a league that would rather you shut up and just play.

But by the same token, Jenkins, should be wary of the owners because this current deal sounds like a ploy to simply shut the players up. I’m worried that the owners have something insidious up their sleeves and that they are going to retaliate against players who participated in this protest when the heat dies down.