Can Gerardi lead the Phillies into the Postseason in 2020? 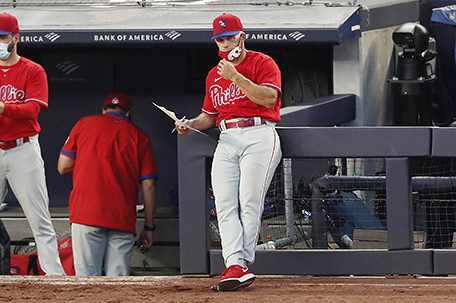 After spending most of the spring and summer trying to figure out how to play baseball amid a global pandemic, the Philadelphia Phillies will kick-off the team’s abbreviated 60-game season with a three-game series against the Miami Marlins in an empty Citizens Bank Park starting Friday night.

With a schedule that will only involve teams from their division — the National League East — and the American League East, the Phillies will have a tough task to get to the postseason, especially when they have to face teams like the Washington Nationals, who will be defending their World Series championship, the Atlanta Braves, who won the NL East last year, and a murderer’s row in the AL East that includes the New York Yankees, last year’s AL East champs, and division contenders like the Tampa Bay Rays and the Boston Red Sox.

Perhaps the most important upgrade for the Phillies over 2019 is at the managerial position. Former Yankees skipper Joe Girardi brings a winning pedigree to a franchise that has contended for a playoff spot for the last two seasons only to come up short down the stretch.

Girardi comes into the 2020 season with a 988-794 record that includes five 90-plus win seasons, 10 straight 80-win seasons, and a World Series title managing the Yankees from 2008-2017. Instead of a manager who relied heavily on analytics like former Phillies skipper Gabe Kapler, Girardi will bring his experience as a manager who knows how to get the best out of his players by balancing old school tactics, such as holding players accountable (something Kapler wouldn’t do) while embracing today’s analytics.

On offense, the one thing that the Phillies have in their starting lineup is a bunch of guys who are capable of putting the ball out of the park from top to bottom now that the National League is playing with the designated hitter rule.  The Phillies starting nine, including designated hitter Jay Bruce, are all capable of hitting double-digit homeruns, especially in a place like Citizen’s Bank Park.

Some baseball observers have said that superstar slugger and right-fielder Bryce Harper had a subpar year, if you consider 35 homeruns, 114 runs batted (8th NL), a .372 on-base percentage, a .572 slugging percentage, and .882 Ops a bad year.

But Harper will have help from guys like catcher J.T. Realmuto, who hit 25 homeruns with 83 RBI and first baseman Rhys Hoskins, who hit 29 homeruns while driving in 85 runs before a disastrous slump in the second half of the season when he batted just .180 with 9 homeruns and 26 runs batted after hitting 20 homeruns and driving home 59 runs before the All-Star break.

Hoskins will be a part of an infield that includes Jean Segura who will be playing at third base this season. He’s another Phillies player with a decent bat and has proven that he is capable of playing just about every position in the infield. Segura was moved from shortstop to third base due to the addition of former Yankees shortstop Didi Gregorius.

Leftfielder Andrew McCutcheon, who played in just 59 games before a season-ending knee injury, is capable of hitting about 15-20 homeruns a season.

Along with perennial Cy Young contender Aaron Nola (2019-12-7, 3.96 ERA), the Phillies signed former N.Y. Mets star Zack Wheeler (2019-11-8, 3.96 ERA)  to give the Phillies a stronger starting rotation than last season. Wheeler, who has a 96-mile an hour four-seam fastball, can mix in a variety of pitches to keep opposing batters off-balance.

The biggest question for the Phillies in this abbreviated season is whether or not their bullpen can hold a lead, something that was among the many things that helped the Phillies to fall apart in the second half of the season.

Hector Neris (2.93 ERA), who had 28 saves and had stretches of the 2019 season where he was unhittable, will be the Phillies closer with Adam Morgan being the setup guy. But who steps as a middle reliever is anyone’s guess. But the one thing that the Phillies have in their favor is that Girardi has a reputation for running a solid bullpen and new pitching coach Bryan Jackson is good at working with young pitchers.

Outlook: To be sure, the Phillies are going to score runs, but the key to success for their season will rest on whether or not the bullpen can keep them in games when they’re down and close out games on a consistent basis when they have slim, one-run leads.