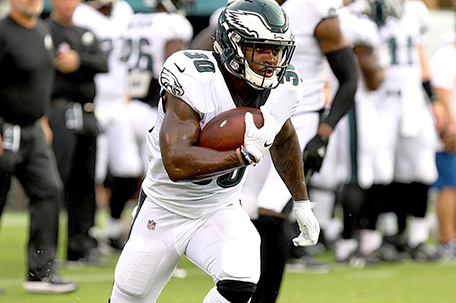 If he can manage to avoid getting hurt, there’s a space on the Philadelphia Eagles roster for Wendell Smallwood.

When you ask Philadelphia Eagles offensive coordinator Frank Reich about second-year running back Wendell Smallwood, he speaks of him in glowing terms and has confidence in his ability to run, catch the ball out of the backfield and block when he’s not in the pass pattern.

“I think Wendell is a true three-down back,” Reich said. “When we first drafted him, I kinda looked at him as a first and second down back. I thought he would be okay on third down, but really he’s turned out to be better than I thought. I think he is a very versatile back who knows protections very well. He runs good routes, he catches the ball well, and I think he’s a slashy runner on first and second down.

The problem with Smallwood has nothing to do with his prowess as a running back because he has shown flashes of brilliance… It’s also not Smallwood’s ability.

It’s been his availability.

After playing well in OTAs and the early part of training camp, Smallwood was sidelined with a pulled hamstring. Last season, he missed the final three games of the regular season with an MCL tear and struggled through last season’s training camp with a quad injury.

Eagles running back coach Duce Staley said Smallwood was having the best camp out of all the running backs in camp before he was injured. He got back out in the field this week and participated in a series of scrimmages against the Miami Dolphins in preparation for the game the two teams played on Thursday night at Lincoln Financial Field.

Since the third preseason game is considered the dress rehearsal for the regular season, Smallwood said he’s excited to get back on the field to show what he can do with the ball when the Eagles coaches call his number.

“It’s going to be a big weekend,” Smallwood said. “I’m glad I’m back because I know that they’re going to push me. I’m ready to play any role the coaches ask me to do.” 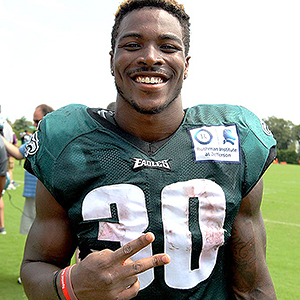 While Smallwood was on the sideline nursing his hamstring, former Wisconsin star and Glassboro High standout Corey Clement has made the most of his opportunities during the first two preseason games. Last Thursday against the Buffalo Bills, Clement gained 34 yards on seven carries and scored a touchdown.

“Corey looks good, he really looks good ….He adds a lot to the mix, he’s a tough runner,” Reich said.

The one thing that Clement is showing so far, is that he can be an every-down back. He can catch the ball out of the backfield and he is proving that he can be a capable blocker on passing situations. As a rookie free agent, Clement said he still has a lot to prove and doesn’t have the luxury of resting on his laurels.

“I was called upon a few times and l loved it,” Clement said. “Just being able to show my versatility within the passing game and catching out of the backfield, they want to see if I can do that.  So that’s going to give me the upper hand. I gotta look forward to (this week) practice going against Miami and doing it better than last week in practice.  I don’t let anything get to my head. I realize I wasn’t drafted, I still have a chip on my shoulder.”

At this point in training camp, the Eagles are going to have a running back by committee, something that Reich doesn’t have a problem with right now.  LaGarrette Blount will be the Birds guy in the red zone and in the fourth quarter—Smallwood and Clement are both capable being three-down backs—while Darren Sproles and possibly Donnel Pumphrey will the speed guys on third down.

“Those guys are all good change of pace from each other. They all do their thing,” Reich said.

Injuries give Barner the chance to shine