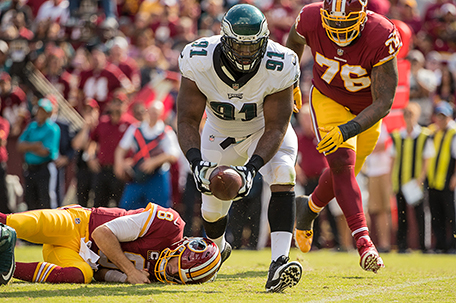 ABOVE PHOTO:  Philadelphia Eagles defensive tackle Fletcher Cox (91) recovers a fumble for a touchdown during the game against the Washington Redskins, Sunday, Sept. 10, 2017, Landover, MD. The Eagles defeated the Redskins 30-17. (Al Tielemans via AP)

The Philadelphia Eagles are hoping to build on a strong performance from its front seven against Washington in this week’s game against Kansas City.

LANDOVER, Maryland —With all the shiny new offseason acquisitions on the offensive side of the football, it was the Philadelphia Eagles defense that enabled the Birds to come away with a 30-17 win over the Washington Redskins last Sunday at FedEx Field.

The Eagles are hoping to rattle and pressure Kansas City Chiefs quarterback Alex Smith the same way they did Washington’s Kirk Cousins. The Birds front seven harassed Cousins throughout the game and kept him off balance, sacking him four times.

“Hats off to the guys on defense,” said head coach Doug Pederson. “They battled. They hung in. They kept our offense in good situations when we took the field.”

And when the Birds defense wasn’t putting Cousins on the turf, they were forcing him to miss his receivers by either overthrowing or under throwing them.

In fact, it was the Eagles defense that  came up with a couple of huge plays that determined the outcome of the game.

With the Eagles hanging onto a five-point lead late in the fourth quarter, defensive end Brandon Graham came through with a game-saving sack of Cousins that forced a fumble which became a touchdown when defensive tackle Fletcher Cox took it 20 yards to the end zone.

The touchdown sealed the game for the Eagles.

“We had five points on the board and we said let’s go out there and make a play  and we made it at the end,” said Graham, who had two sacks and a forced fumble. “They (the Eagles secondary) made Cousins hiccup and took away his first read and we were there to get the sack and I was glad that Fletch took that thing in.”

Throughout the game, the Eagles kept Cousins from getting into any kind of rhythm and they didn’t let him comfortable.

“No quarterback is the same when they’ve got somebody barreling down on them,” safety Malcolm Jenkins said. “We were able to get pressure right in his face and that obviously is going to affect any quarterback.

While Cox’s touchdown run put the final nail in the Redskins’ coffin, the biggest play of the game occurred early in the fourth quarter.  With the Eagles leading 19-17, the Redskins drove from their own 36 down to the Eagles 18 and seemed destined to take the lead on a touchdown or a field goal.

Instead, the Eagles defensive line got in Cousins’ face and forced an errant pass that wound up in the hands of Eagles second-year Jalen Mills in the end zone. The Redskins would come no closer for the remainder of the game.

“That was big,” Graham said.

The Birds had some key acquisitions on the defensive side of the football including defensive tackle Tim Jernigan, who had one sack of Cousins.  Mills said the pressure put on by the Eagles defensive line enabled the secondary to play with a lot of confidence.

“That’s big because it comes from Coach Pederson getting those guys in the offseason. Getting Jernigan, Derek (Barnett) in the draft. … Those guys have been flying around, scraping and as far as that goes that helps us play a lot faster on the back end.”

The bad news for the Eagles secondary is that they will probably be without cornerback Ron Darby, who left the game in the first quarter with an ankle injury.

But even with Darby out, Jenkins believes that the Birds secondary will overcome.

The Eagles go to Kansas City on Sunday to face former coach Andy Reid and the Chiefs.