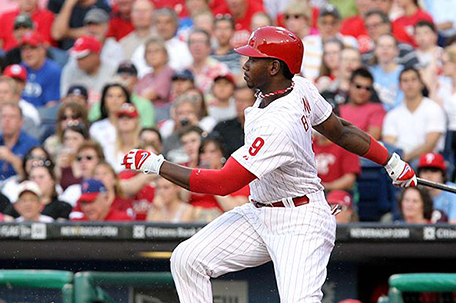 ABOVE PHOTO: Domonic Brown has been struggling at the plate and in the field. His misplay of a fly ball cost the Phillies in Wednesday’s loss to the Miami Marlins.  (Photo by Webster Riddick.)

It was one of those nights where the Phillies (35-42) could point to doing really well in couple of facets of their game, but found themselves faltering in others.

Starting pitcher A.J. Burnett didn’t have a bad night at all. He had eight strikeouts while allowing just five hits and three runs. But he had one bad inning that wasn’t exactly his fault.

With two on and two outs in the fourth inning, Miami leftfielder Marcel Ozuna hit should have been an easy fly ball to Domonic Brown in left. But the Phils outfielder over ran it and the ball ended up going to the left field wall to score Giancarlo Stanton from second.

That led Burnett giving up a two-run double to Jarrod Saltalamacchia to give the Marlins a 3-0 lead they had no business having in the first place.

To his credit, Brown didn’t hide from reporters in the training room or in the showers after the game, he took full responsibility for his blunder in the field.

“That’s a play I gotta make for my team,” Brown said. “That changed the whole game. I told A.J. I was sorry about it. But that play has to be made. It was a hard-hit line drive. I made a break in and that was definitely a big mistake. It was a low liner, I took a step in, but it was too late.”

Takeaway Brown’s blunder in the field, the Phillies might have come away with a 2-0 shutout, but that’s the maddening luck of a mediocre team that just can’t seem to get it together.

“If that ball’s caught right there, there’s no runs up on the board, it’s the third out,” said Phillies manager Ryne Sandberg said. “A .J had enough stuff to throw a shutout the rest of the game.”

Meanwhile in a solid display of backing up your teammate when stuff hits the fan, Burnett said there was no need for Brown to apologize to him. He said he should have gotten Saltalamacchia, who was 1-for-15 against him with nine strikeouts before that at-bat.

“I felt like I should have picked (Brown) up the next at bat. That’s what we do. You pick each other up,” Burnett said. “If the pitch is a little bit low to (Saltalamachhia) and you pick (Brown) up. He plays hard, he comes in everyday and prepares and goes about his business. It’s not like he’s trying to miss balls out there. Plays like that happen you gotta pick your teammates up.”

On the offensive side, the Phillies had their shots. In the second inning, they had men on second and third with just one out, but could not score. With the bases loaded and one out, the Phillies could only get a sacrifice fly from Chase Utley that scored Ben Revere.

An RBI single by Brown scoring Marlon Byrd in the bottom of the sixth to cut the Marlins lead to 3-2. That’s as close as they would come.

Miami starting right-handed pitcher Henderson Alvarez wasn’t necessarily the second-coming of Cy Young or Walter Johnson, but he did well enough to keep the Phillies bats at bay. He allowed just two runs (one earned) on seven hits with three strikeouts and a pair of walks.