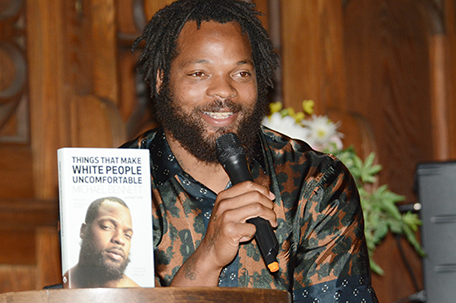 At a talk sponsored by a popular Germantown bookstore, the newest Philadelphia Eagle, defensive end Michael Bennett, talked about his new book and the conversations he hopes it forces.

In the not-too distant past, it was taboo for African-American athletes to voice their opinion on race and social justice issues due to a combination of the fear of being sanctioned by one’s team or league and the fear of losing a lucrative endorsement deal, something best embodied by NBA great Michael Jordan’s reply of “Republicans buy sneakers, too” when asked to endorse a Black Senate candidate in North Carolina.

But thanks to Black athletes like Colin Kaepernick taking a knee during the National Anthem and Malcolm Jenkins lobbying state legislatures all over the nation to pass laws to stop brutality and mass incarceration, African-American athletes are once again leading the discussion.

Three-time Pro-Bowler and Philadelphia Eagles defensive Michael Bennett, who has been an outspoken critic of police brutality, added his voice to the discussion of racial justice in the United States, with his new book, “Things That Make White People Uncomfortable.”

During a book signing and discussion held at St. Luke’s Episcopal Church on Germantown Avenue Tuesday, Bennett had a frank discussion about race and other social issues with Temple University professor and CNN commentator and political analyst Marc Lamont Hill. The event was sponsored by Uncle Bobbie’s Coffee and Books, the coffee shop Hill owns on Germantown Avenue.

Co-written by Dave Zirin — author and sports columnist for The Nation magazine — Bennett’s book takes a critical look at the relationship between Black athletes and the sport industrial complex that has the NCAA and the National Football League at its center.

If the last year has shown us anything, it’s that White people would like to avoid many of the issues Bennett raises in his book. NFL fans and President Donald Trump have wrapped themselves tightly in patriotism toward that end.

“For me, it’s about being uncomfortable [as a Black man] on a daily basis,” he said. “And I think writing a book about that and getting the attention of White people because it is time for White people to be uncomfortable and to have this conversation.”

That conversation began with the NFL protests. Bennett touched on the league’s new policy that fines teams if players protest on the field while the National Anthem is played. The NFL Players Association and the players themselves consider the policy wrongheaded.

The players are currently figuring out a response while maintaining their commitment to the issues that brought them to their knees in this first place, Bennett said.

“I don’t like the ruling, but the most important thing is just working with people in the communities,” he said. “It’s about building bridges to different communities and giving them a real voice and showing that we care and finding ways we can contribute.”

While the president doesn’t agree with how the players are exercising their First Amendment rights, they have the Constitution on their side, Bennett said.

In fact, the protests are right in line with the country’s values, he said.

“Police brutality, women’s issues, the Flint, Michigan water issue. These things we feel are important as people and I think that’s the most you can do as a patriot is to fight for the people,” Bennett said.

More importantly, Bennett said, as African-American athletes’ issues like the killings of unarmed Black men is something that directly affects them.

Bennett told the audience of about 100 or so gathered at St. Luke’s that he believes that Kaepernick is being blackballed by the NFL for his anthem protests.

“Of course, he is,” Bennett said. “The idea that he is not playing is crazy. We hope he gets another opportunity, but obviously he’s being blackballed.”

But while his life as an athlete takes up a lot of this book, Bennett also discusses his personal evolution as a man and his relationship with his mother.

“As an athlete you have to put yourself out there and be able to share and show people that you care. That’s the most important thing you can do,” Bennett said. “At the end of the day, I’m not an athlete, I’m just a human being who’s trying to be a better human being who wants the society to be better. I think you have to able to voice your opinion and use your platform. Why not write a book that can change young kids?”

Bennett said writing this book was his way of connecting to young people of color in a way that the league or individual teams don’t on a regular basis.

“A lot times, kids look at athletes and see as a certain type of role model that would just sell things to them, he said. “But we don’t give them hope or show them issues that pertain to them, especially Black and Brown kids. Whenever you’re in an NFL city you never see the Black and brown kids, so it’s always our job to find ways to reach them.”

You can get a copy of “Things That Make White People Uncomfortable” at Uncle Bobbie’s Coffee and Books, 5445 Germantown Ave., or anywhere where books are sold.