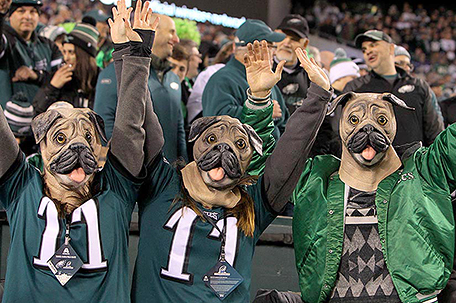 Your NFC Champion Philadelphia Eagles are relishing being the underdog…again.

When the Philadelphia Eagles arrive in Minneapolis to take on the New England Patriots in Super Bowl LII, they will be an underdog for the third straight game.

But the NFC Champion Birds will gladly put those “dog” masks on again because they believe that they have the New England Patriots exactly where they want them.

Right now, no one is giving the Eagles a snowball’s chance in hell to win their first Super Bowl over a Patriots team considered one of the best of all time. Vegas has the Eagles as a five-point underdog.

It’s no big deal to a team that feels it’s been counted out since losing starting quarterback Carson Wentz for the year due to a torn ACL.

“We’ll be underdogs tomorrow,” said Eagles safety Malcolm Jenkins. “It’s not a role that’s going away, so it doesn’t define us, but it’s one of those things. We hear it.  We understand, but it’s one of those things we feed off of. We’ve got a bunch of underdogs. You look at the guys we have on this team, all of them have come through some type of adversity. … underdog is a role we’ve had our entire lives and we’re comfortable with it.”

After spotting the Vikings an early 7-0 lead on the game’s first drive, the Eagles scored next 38 points to end the competitive portion of this game early in the third quarter. The Birds came away with an emphatic 38-7 victory over the Minnesota Vikings in front of a frenzied crowd at Lincoln Financial Field.

It will be the third trip to the big game for an Eagles franchise that has never won a Super Bowl and hasn’t won an NFL Championship since 1960. Super Bowl LII will be a rematch of Super Bowl XXXIX when the Patriots defeated the Eagles 24-21. New England advanced to the Super Bowl by defeating the Jacksonville Jaguars 24-20 in the AFC title game.

For all those people who said there was no way that Eagles backup quarterback Nick Foles would lead the Eagles to the Super Bowl, have fun watching him on Super Bowl Sunday on a TV set near you.

“I’m just so happy for him and what he’s been through and everything now to finally put not only himself, but help this football team get to where we want to go and hopefully finish the year right,” said Eagles head coach Doug Pederson. 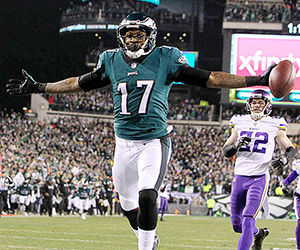 Eagles Wide receiver Alshon Jeffrey sprints to the end zone for a touchdown during the NFC Championship against the Minnesota Vikings. (Photo: Webster Riddick)

In the championship game, Foles removed all doubt about his ability to lead the Birds. In fact, he resembled the guy who once threw seven touchdown passes in the game. Foles completed 26-of -33 passes for 352 yards and three touchdown passes—including two of over 40 yards.

“My hat’s off to Nick,” Pederson said. “He trusted in his ability, and trusted in me as the head coach and putting him in ideal situations and situations to be successful on the field. The guys believe in him. Listen, he’s not a rookie. He’s a veteran player who has played a lot of games in this league.”

Meanwhile, the Eagles defense put the kybosh on the Minnesota offense.  After allowing a Vikings touchdown pass from Case Keenum to tight-end Kyle Rudolph, the Birds defense completely destroyed the Vikings offense and didn’t allow them to score for the rest of the game.

It was the Birds defense that helped them to seize the momentum. Cornerback Patrick Robinson’s 50-yard interception return for a touchdown set the tone for the game.

That woke everyone up.

For the game, the Birds defense forced three turnovers, which included a sack and a fumble by Keenum late in the second quarter when Minnesota drove the ball beyond the Eagles 20-yard line.

The Eagles sacked Keenum just once, but the constant pressure on the quarterback by the Birds front line, especially from Chris Long, kept the Minnesota offense out of sync.

Of course, the biggest obstacle to the Eagles winning their first Super Bowl title will be quarterback Tom Brady and the Patriots. Jenkins said battling the adversity of injuries and people doubting their starting quarterback has made the Birds a mentally tougher team.

“All of the adversity we faced earlier in the season, we were on the road three out of the first four games, we had all these injuries early, all of that prepared us for this time to where anything can happen out there and this team will be unfazed,” Jenkins said after the game.  “We’ll continue to believe in the guys who are out there. We’re going to communicate, adjust, and attack. That’s been our mantra all year.”

A Matter Of Luck