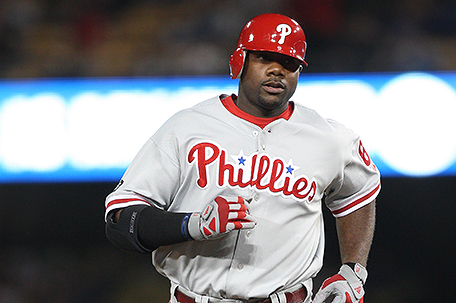 He may not have a choice.

The former National League MVP was released from his minor league contract Monday by the Atlanta Braves after he struggled at Triple-A Gwinnett, a major blow to the 37-year-old slugger’s hopes of carrying on with another team after a long career with the Philadelphia Phillies.

Less than a week after Howard insisted “there’s more in the tank,” the Braves decided otherwise. He lasted only 11 games with the G-Braves, hitting .184 with one homer and five RBIs.

The Braves were hoping Howard could bolster an anemic bench and serve as designated hitter in interleague games. But his options were limited, since he could only play first base and Atlanta already has Freddie Freeman.

Howard was once among baseball’s most feared hitters. In 2006, his first full season as Philadelphia’s starting first baseman, he put together one of the greatest stat lines in baseball history: 58 homers, 149 RBIs, a .313 average and an MVP award.

The Phillies would go on to win five straight NL East titles, a stretch that included two trips to the World Series and a championship in 2008. Howard averaged 41 homers and 129 RBIs during that run, finishing in the top 10 of the MVP voting every season.

But his career was forever altered on the last play of the 2011 division series against the St. Louis Cardinals, when he tore his Achilles tendon running out a grounder for the final out of a 1-0 loss.

He hasn’t been the same since.

Plagued by one injury after another, Howard’s production plummeted the last five seasons. In 2016, he showed flashes of power with 25 homers but batted a career-worst .196, prompting the Phillies to decline a $25 million option for this season. He was honored by the team before its final home game but insisted that he had no plans to retire.

Howard made it clear last week that he still believes he can contribute.

“If you walk away, don’t walk away with something still left in the tank,” he said. “Then you’re wondering like, ‘Man, what could I have done?’ When I’m done playing, I want to leave it all out on the field.”

Howard was even willing to go to the minors, taking a fraction of the salary he once made and with no guarantees that the Braves would bring him up to the majors.

“Once you leave the minor leagues, you want to not come back,” Howard said. “But it’s the path that I’m on, the journey that I’m on.”

That journey may have ended, especially since he missed all of spring training before the Braves finally called. There’s clearly not a lot of interest in an aging slugger with a cumulative .226 average over the last five years.

The Braves decided Santana was a better option for the bench. The 26-year-old has spent parts of four seasons in the big leagues, hitting .276 with 10 homers, 76 RBIs and 41 stolen bases. This season with the Twins, he’s hitting .200 with one homer in 13 games.

Chapman was claimed off waivers by the Braves late in spring training after spending parts of the last four seasons with the Houston Astros. Control has always been an issue for the lefty, who had a 7.71 ERA in nine games at Gwinnett after failing to earn a spot on Atlanta’s big league roster.