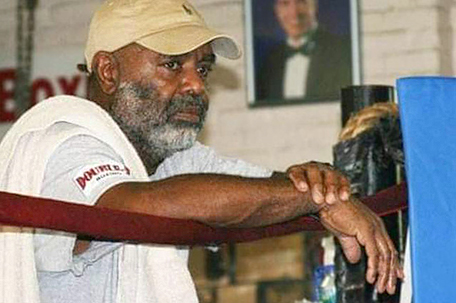 Legendary boxing trainer Sloan Harrison, who passed away December 15 at the age of 71, was a boxing trainer who pushed many local contenders to the pro and amateur ranks. He trained  many of them inside a boxing gym at the Kingsessing Recreation Center.

According to pro boxer Eric “Outlaw” Hunter, Harrison saw something in him. He said Harrison was a trainer who always pushed him to the limit. That’s the reason why Hunter respected the fact that Harrison worked many hours with him without any complaints.

“It has always been us against the rest of the world,” Hunter said. “I will never forget the things he taught me. The loyalty we had for each other was unmatched. All he kept telling me that I was going to be a world champion. He felt nobody could beat me. He always told me I was the best thing out here and the more he told me the more I believed him. Through it all, he never showed his true emotions. He always said it in words. That’s why it was great to hear him say his words once again. I knew he respected me as a boxer. I know he always loved what I did inside that ring. I know he took that to his grave. That’s why I will always love what he ever did for me.”

During his years at Kingsessing Recreation Center, Harrison trained many well-known boxers around the city, including Bernard “The Executioner” Hopkins, Frank “The Animal” Fletcher and his brother Anthony “Two Guns” Fletcher, along with “Hammerin’” Hank Lundy, Ed “Ajax” Dennis, Leroy Davis, Damon Feldman and Anthony Postell. Before Harrison started training boxers at Kingsessing Recreation Center, he trained them inside the gym at Southwest Youth Center, where his boxing legacy began.

“As a youngster growing up, we were teenagers together,” said David Wilkes, Sloan’s longtime friend, who watched Harrison grow up to become a mentor to many boxers around the city. “He was a person who didn’t talk much. If he liked you, he like(d) you. If he didn’t like you, he wouldn’t bother with that person. He never had anything bad to say about anybody. He was a person who stayed to himself.”

According to Wilkes, Harrison also ran his own construction business. He said that Harrison taught many people about construction work as well as helping them start their own businesses.

According to the people who knew Harrison, he was a man who spent roughly 40 years training boxers around the city. Through his training, he built many young boxers into championship contenders. He even spent a number of years at the Upper Darby Boxing gym. That’s where he displayed much of his body of work. He was a trainer that many boxers respected.

Even though there aren’t many pictures of Harrison on Facebook, there are still enough memories of this talented boxing trainer to honor his legacy.

Maybe one day, a boxing promoter or one of his fighters can do something special for Harrison in his honor – too often a boxer or a trainer is long forgotten. However, in the case of Sloan Harrison, his work in the boxing ring should never be forgotten. His legacy should stand strong for many years to come.