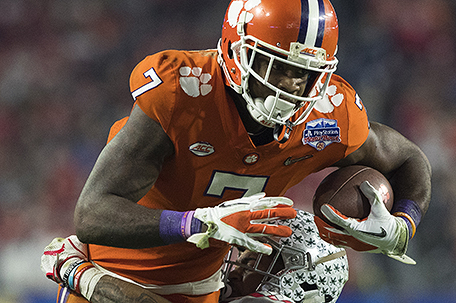 If you’re a Philadelphia Eagles fan, you’re probably hoping that Howie Roseman, the team’s vice-president of football operations, was watching Monday’s College Football National Championship game between the University of Alabama and Clemson.

You’re especially hoping because you’re a fan of a team with no real wide receiver threat that Roseman got a look at Clemson’s star wide out Mike Williams and is figuring out what he can do to move up in the NFL Draft to get him.

The Eagles will have the 15th pick in the 2017 NFL Draft and Williams, who became a hot commodity once he declared for the draft earlier this week in light of his national championship performance, might be gone if Roseman doesn’t pull off the same kind of blockbuster trade that landed them the No. 2 pick in 2016.

Because they don’t have a true No. 1 receiver who can move the chains, score in the red zone and flip field position, Williams, arguably the best receiver in the draft, is someone the team really needs. After Williams’ outstanding performance in Clemson’s 35-31 win over a tough Alabama defense that has some stellar prospects at the cornerback spot (another need for the Eagles), you would think that Roseman would be on the phone right now trying to maneuver into a spot to draft him.

Especially since the person selected with that second pick in the draft, quarterback Carson Wentz showed everyone that he’s the kind of quarterback you can build a franchise around. With a wide receiver like Williams and a good offensive line, he could become an elite quarterback. When he went up against some Marlon Humphrey, one of Alabama’s best cornerbacks and another potential fist-round draft choice, Williams managed to catch eight passes for 94 yards.

During Clemson’s climb to overtake Alabama, Williams used his 6-3, 225-pound frame to pull down clutch catches that moved the chains.  This is a guy who does it all.  Williams has good separation skills, he has the determination to make the tough catch and is good enough to a good possession receiver.  He is the football equivalent of a five-tool player in baseball.

Williams, who officially declared for the draft earlier, this week will leave Clemson with 177 career receptions for 2,727 yards and 21 touchdowns.

More importantly, Williams is a legitimate No. 1 receiver and is, to be honest, better than anyone the Eagles have on their current roster.  Roseman owes it to Eagles fans to do everything he can to get this guy because but he’s one of those guys that could vault the Birds right back into contention.

But if the Eagles can’t draft Williams, not all is lost.

There’s a guy at Western Michigan that’s sort of flying under the radar for now and that’s wide out Corey Davis.  At 6-4, 213 pounds, Davis, like Williams, is a matchup nightmare for cornerbacks.

Davis not only can move the chains, but because of his ability to go and get the ball in traffic, he can turn a short gain into a long touchdown run. In the Mid-America Conference Championship game, he took a short pass and then used his speed to run by everyone for a 70-yard touchdown pass.

On deep passes, Davis can get separation and also runs routes well. During his career with the Broncos, Davis became college football’s all-time career leader in receiving yards with 5,285. He also had 332 career reception and 52 career touchdowns.

Last season, Davis caught 97 passes, 1,500 yards and 19 touchdowns. He was named the MAC’s offensive player of the year. Davis was the one of the main reasons Western Michigan was unbeaten coming into the Cotton Bowl against Wisconsin. Even though the Broncos inevitably lost that game, Davis still caught six passes for 73 yards and a touchdown.

One of the knocks against Davis is that he played in the MAC, which is not one of the so-called “power conferences”. Some social media draft expert will probably complain that he didn’t face anybody from the vaunted Southeastern Conference.

Before you take that as gospel, however, here’s something to remember: There’s more than a few NFL Hall-of-Famers who have come from smaller schools. The NFL’s all-time leading receiver is Jerry Rice, who played his college ball at Mississippi Valley State. Then there’s Pittsburgh Steelers’ wide out Antonio Brown, a Central Michigan, who is arguably the best receiver in the game.

The bottom line is that if the Eagles can’t get Williams, Davis would be just as good for the Birds and like Williams, he is better than what they have now.

Which is why they need to get on the ball.