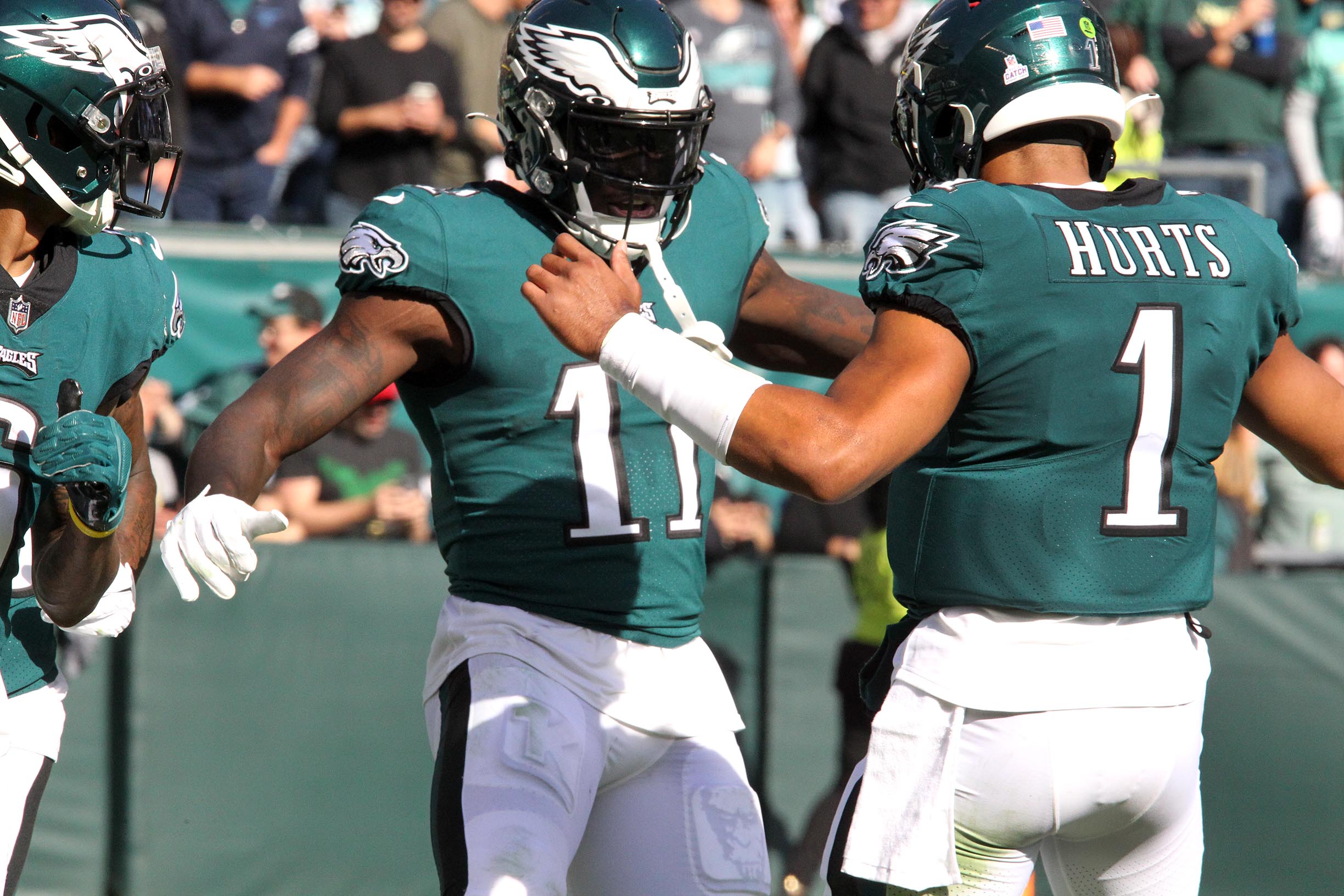 The combination of Philadelphia Eagles quarterback Jalen Hurts and wide receiver A.J. Brown proved too much for the Pittsburgh Steelers.

Above photo: Philadelphia Eagles wide receiver A.J. Brown and quarterback Jalen Hurts celebrate one of the three touchdowns the duo recorded during Sunday’s 35-13 victory over the Pittsburgh Steelers at Lincoln Financial Field. Photo by Webster Riddick

If Philadelphia Eagles fans were looking for a justification of why general manager Howie Roseman and the Birds’ front office decided to trade for wide receiver A.J. Brown, Sunday’s resounding 35-13 victory over the Pittsburgh Steelers was that justification.

The tandem of quarterback Jalen Hurts to Brown hooked up for three touchdown passes in the first half. The former Ole Miss star was targeted by Hurts 11 times and caught six passes for 156 yards. Meanwhile, Hurts lit up the Steelers secondary by tossing four TD passes and completing 19-of-28 passes for 285 yards.

During the game, Hurts and Brown hooked up for touchdown passes of 39, 27, and 29 yards.  When defenses started to double down on Brown, it enabled other Eagles receivers like Dallas Goedert (six receptions for 64 yards); Devonta Smith (five receptions for 23 yards; and veteran wideout Zac Pascal, who scored on a 34-yard touchdown pass from Hurts to shine.

“I got off to a hot start and we knew they were going to start doubling me,” Brown said after the game. “And they did. It was another opportunity for someone else and I don’t mind that at all. I just know that whenever I got the opportunity to go one-on-one, I gotta make the most out of it.”

Brown said he credits the chemistry that he has with Hurts is based on their long-standing friendship with Hurts which dates back to their college days when Hurts tried to recruit Brown to join him at the University of Alabama.

“I think we just want to be great,” Brown said. “This is somebody that I call a friend. He knows what I want to accomplish, and I know what he wants to accomplish.  When you’re playing for somebody that you love, who you call family, it’s a different meaning behind it. And I know I can’t let him down. We’re just having fun and playing for one another. “

Eagles head coach Nick Sirianni whenever Brown, Smith, or Goedert are having a big game catching passes from Hurts, it frees him up to do other things with the offense.

“Well, when you have A.J., [WR] DeVonta [Smith], [TE] Dallas [Goedert], all the attention was on Dallas on that play, on Zach’s [WR Zach Pascal] touchdown, right?” Sirianni said. “So, you got these play makers and guys making plays off them because the attention is on them. That doesn’t just [go for the passing game], it also goes for the run game as well.”

Hurts has the one thing that former Eagles quarterback Donovan McNabb lacked during his time in Philadelphia — a consistent group of topflight receivers that could take over a game at any time.

“I have fun with it because I’ve seen all of these guys do amazing things,” Hurts said. “I’ve seen Devonta Smith do crazy things in college. I’ve seen A.J. as a friend, as a fan take slants 70 (yards). I’ve seen Dallas Goedert make the craziest catches in a game and in a practice.”

Even as he is slinging the ball to them from the pocket or when he’s on the run, Hurts said he finds himself cheering with the 69,000 plus fans at Lincoln Financial Field just to see his receivers make the big plays.

“When I see them make those plays in a game or better yet, when I’m playing with them in a game, I’m like I got my popcorn ready after I throw them the ball,” Hurts said.  “I want to make sure I do my job to get them the ball. Then I can be a fan and watch them go to work.”

Watching Hurts lead the Birds to their first 7-0 record since 2004 when the Eagles had the combination of McNabb and Hall of Fame wide receiver Terrell Owens is why a successful NFL quarterback is only as good as the weapons you surround him with.

The Eagles will take their undefeated record to Houston on Thursday night to take on the Texans. If you’re a subscriber to Amazon Prime, you can catch it there. If not, it will also be broadcast on Fox-29, starting at 8:15pm.