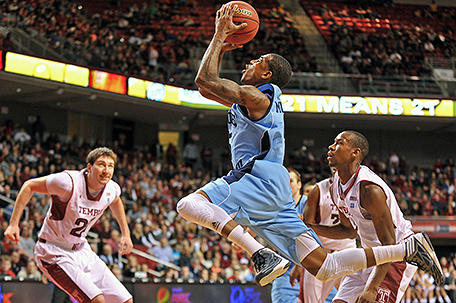 ABOVE PHOTO:  Rhode Island Rams guard Xavier Munford (5) flies through the air to take a shot during the A-10 conference basketball game March 2, 2013 in Philadelphia.  (Aspen Photo / Shutterstock.com)

Young black men playing basketball and football for the country’s top college teams are graduating at lower rates than black male students at the same schools — despite having financial and academic support that removes common hurdles preventing many undergraduates from earning a degree, a new report has found.

“It happens just about everywhere,” said Harper, director of Penn’s Center for Race and Equity in Education. “Generations of young black men and their parents and families are repeatedly duped by a system that lies to them about what their life chances are and what their athletic outcomes are likely to be.”

Just as the attention of the sports world shifts to March Madness, the home page for the NCAA’s website features data on how few student-athletes are drafted to play professional sports, promoting its efforts to educate college players. The NCAA men’s and women’s basketball tournaments begin this week.

“Although there is a great deal of interest in basketball this time of year, we think it is important to remind fans of what our mission is — to provide student-athletes educational opportunities that will last a lifetime,” Bob Williams, NCAA senior vice president of communications, said in a statement to The Associated Press.

A recent NCAA report on graduation data shows the graduation rate for black male players at all Division I basketball programs was 72 percent for the class that started in 2008. For football, the number was 69 percent. On its website, the NCAA says graduation rates are higher than ever, and 15 percent of student-athletes say they wouldn’t be in college without sports.

But the numbers don’t hold up when looking at the NCAA’s main revenue-generating sports at elite programs.

“When coaches are looking for the best athletic talent, that’s what they’re looking for,” Harper said. “They’re not really concerned with academic talent.”

Harry Swayne, who played football at Rutgers University for four years before a 14-year NFL career from 1987 to 2001, said he saw the shift in mentality from the idea of college as a path to education to a pipeline to a professional sports career.

“Statistically, more than likely, they won’t make it,” Swayne said. “We don’t want to talk them out of their dreams; we just want to give them some reality, too. We want to introduce them to some other possibilities for when football is over, because it is coming to an end sooner than they think and sooner than they’re ready for.”

Swayne said schools should look at student-athletes more as people than players, and help them prepare for life beyond the game.

Harper said the solution is less likely to come from colleges than parents whose children are being recruited. He encouraged families to ask coaches about their overall student-athlete experience before committing to schools.

“Sometimes, young men get so excited about the prospect of playing for a particular place and coach,” Harper said. “We’re going to have to see more student activism, where black players say, ‘You’re going to graduate me, or I’m not going to play for you.’”