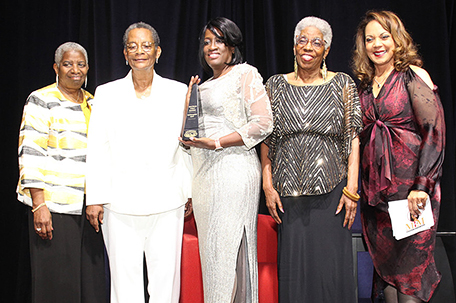 Comradery appeared to be the night’s theme amongst the room full of history makers, hall-of-famers, Olympic champions, those who have made extraordinary contributions in education and finance, and the next generation of women in sports.

The event’s mistress of ceremonies, Monique Braxton, moderated the discussion with Hill. Braxton, a Broadcast Hall of Famer, is also an Emmy award-winning storyteller and like Hill, is known for spearheading innovative projects that empower and give a voice to women.

“The Black Women in Sport Foundation of record-breaking athletes is changing the lives of hundreds of young girls by exposing them to sports considered nontraditional for children of color,” Braxton, CEO of Monique Braxton Media, said. “I’m elated to have been asked to do a live interview with sports columnist Jemele Hill and produce the salute to honorees, including living legend C. Vivian Stringer.”

In Braxton’s opening remarks, she recalled how now, more than ever, “women athletes are using their voices, dominating sports and media, and are increasingly becoming brand ambassadors.”

During the chat with Hill, Braxton discussed a range of topics including subjectivity in media, Title IX and its impact 50 years later, Hill’s professional challenges, accomplishments, and what to expect in her upcoming memoir, “Uphill.” The two also put a spotlight on the contributions that Black women have made in sports.

“Yet, there is still work to be done,” Braxton said.

BWSF was established in 1992 by Tina Sloan Green, Dr. Alpha Alexander, Dr. Nikki Franke and Linda Green, Esq. It is a nonprofit organization with a mission to increase the involvement of Black women and girls in all aspects of sports, including athletics, coaching and administration.

For over 30 years, even before its incorporation, the BWSF facilitated the involvement of women of color in every aspect of sports in the United States and around the world, through the “hands-on” development and management of grass roots level outreach programs.

“[The] Black Women in Sport Foundation is an example of the very thing that Dr. Alpha Alexander, who was one of the cofounders of Black Women in Sport Foundation, said during her welcome to the audience, that they weren’t necessarily invited to the table so they built their own table,” said Germaine Edwards, BWSF program and communications director. “And it shows that we’re industrious, that we can do what needs to be done in order to move forward. The organization is trying to bring together different supporters and different entities to share resources to get the most impact and to serve the children, the families and the communities that we live in.”

Edwards was surprised with a special award of her own and recognition from the BWFS board at the end of the program in honor of her dedication and years of volunteerism.

She has been a part of BWSF for over 20 years and was introduced to the organization as an undergraduate student at Temple University.

“I was surprised,” Edwards said. “I’m not one for surprises. I like to know what’s going on. But I was pleasantly surprised. I appreciate the recognition.”

Currently, BWSF has a focus on leveling up opportunities for girls who enjoy tennis, lacrosse, and fencing. According to the organization, traditionally the three sports had not been played by or promoted to Black girls.

The organization is committed to making a change through after-school and summer programs that teach girls how to set goals and make good decisions by encouraging interest in the sciences, reading and journaling. Also, in addition to violence prevention and conflict resolution events that strengthen confidence, character leadership, and positive decision-making, girls are taught about the dangers of risky behavior and drug abuse. For more information, visit: www.blackwomeninsport.org.