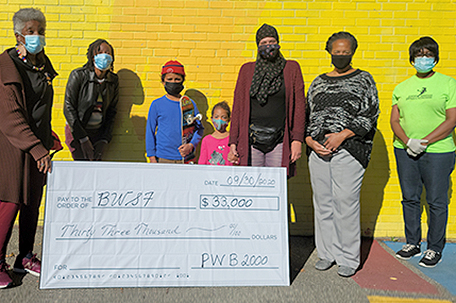 BWSF was awarded the grant from PWB2000 during a check presentation ceremony.

Black Women in Sport Foundation (BWSF) is the proud recipient of a Philadelphia Women’s Basketball 2000 Grant. BWSF received the award for over $33,000 during an informal check presentation ceremony.

The socially distanced, outdoor event was held recently at Dr. Tanner G. Duckrey Public School located in North Philadelphia. The PWB2000 grants were awarded to deserving charitable organizations in Philadelphia for the promotion of youth sports.

Present for the festivities were BWSF representatives executive director Nnenna O. Akotaobi and program and communications coordinator Germaine Edwards, Ph.D..   Also on hand for the ceremony were BWSF supporter  Frank Green, Jr., and community advocates from North Philadelphia: Ruth I. Birchett,  Danita Bates, Brite A. Alexander,  Jennifer Bennetch along with her children Yusuf and Nafisa Bey.

About the Black Women in Sport Foundation

Established in 1992, the Black Women in Sport Foundation (BWSF) is a nonprofit organization whose mission is to increase the involvement of black women and girls in all aspects of sport, including athletics, coaching and administration. BWSF’s work, however, is not limited to black women and girls, enrolling girls and boys in programs conducted throughout the city of Philadelphia and surrounding areas.