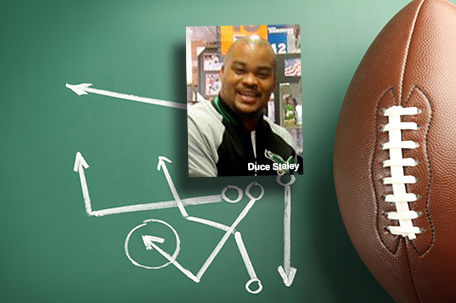 If the Philadelphia Eagles decide to go with a Black coach this time around, here are some of the people they might consider.

During his press conference announcing the firing of coach Doug Pederson, Philadelphia Eagles owner Jeffrey Lurie told reporters that he is going to consider coaches of color as candidates for the Birds top coaching position, including current assistant head coach Duce Staley.

But despite that record, Lurie insists that bringing in a coach of color is something the team is considering.

“I think that we are very open and it’s top of mind to make sure we have some of the best minority candidates in on the search. It’s very important I think for us, for the league and it’s top of mind,” Lurie said.  “I would expect [Eagles assistant head coach/running backs coach] Duce Staley to be a candidate. He’s a great representative of the Eagles and knows our values. I would expect him to be part of the search, as well.”

Staley would be an ideal candidate for the Eagles head coaching position because of the good job he’s done coaching up the running backs. The former Birds running back (1997-2003) has been with the Eagles since 2011 and has been a part of the last three coaching regimes (Andy Reid, Chip Kelly, and Pederson).

In 2016, Staley was a candidate for the Eagles head coach position but was beaten out for that position by Pederson. Since then, he has been passed over for the offensive coordinator job twice. During the 2020 season, he was named the Eagles assistant head coach and guided the team in practice during training camp when Pederson had to quarantine after coming down with COVID-19.

If anything else, Staley commands a tremendous amount of respect from his players. Former Eagle and current New Orleans Saints safety Malcolm Jenkins said in a recent tweet: “Duce Staley #NEXTMANUP”!!! Every time he stood in front of the team, he had the attention and respect of everyone in the room.”

ESPN recently reported the Eagles recently asked to interview Bowles for the Birds head coach position. The former Washington Redskins defensive back does have head coaching experience with the New York Jets where he finished with a 24-40 record.

As the defensive coordinator for the Buccaneers, Bowles coordinated the best rushing defense in the NFL. They were no.1 in rushing yards, rushing touchdowns, and yards per rush.

But Lurie said during his press conference earlier in the week that he is looking for a more offensive-minded coach.

If that’s the case, Lurie should look to Kansas City Chiefs offensive coordinator Eric Bienemy. Since Bienemy has been in Kansas City, the Chiefs have had one of the NFL’s best offenses. He has helped to develop former NFL MVP and Super Bowl MVP Patrick Mahomes.

Could Bienemy be the guy to fix Carson Wentz’s regression in skills that reached an all-time low in 2020?

Bienemy has helped Kansas City to become one of the most potent offensive teams in the NFL. In Mahomes first year as a starter, he was the 2018 NFL MVPs while leading the Chiefs to the AFC title game.  In 2019, Mahomes led the Chiefs and had an MVP performance in the Super Bowl.

And yet, Bienemy has been passed over for head coaching positions. Is race a factor here? Yes. Young, white, “hot shot” offensive assistants like Los Angeles Rams coach Sean McVay have been all the rage among team owners.

If Lurie wants an offensive-minded head coach,  he might want to hire Bienemy.