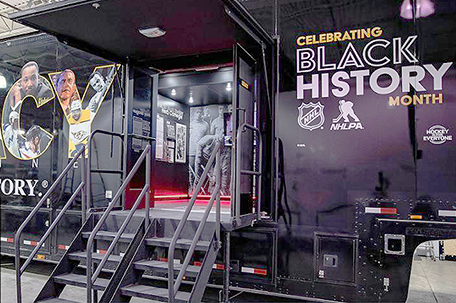 The 525-square foot mobile museum looks back at the founders, trailblazers, history makers and Stanley Cup champions, and looks ahead to the next generation of young stars, NHL officials, broadcasters and women in the game.

The museum will travel to schools, community rinks and NHL arenas during February.

“They’re going to see 200 years of Black achievement in hockey,” American Legacy founder Rodney Reynolds said. “Starting from the 1800s with the development of the Coloured Hockey League in Nova Scotia, all the way through 2018 and looking at players that are part of the sport today. It’s a fascinating journey that attendees of the mobile truck will have an opportunity to experience.”

In addition to the New York Rangers hosting of the museum, it Is scheduled to visit the New Jersey Devils (Feb. 5-6), Nashville Predators (Feb 9-10), Tampa Bay Lightning (Feb. 14-16), Philadelphia Flyers (Feb. 23-24) as part of the 2019 Coors Light NHL Stadium Series, and Washington Capitals (Feb. 25-27). A detailed list of locations and events is listed at: www.NHL.com/BlackHockeyHistory.

Reynolds is more than just a museum curator; he’s a hockey parent. His son, Richard Joshua Reynolds, now 30, was a goalie all the way through high school.

“What was good was[that] it made it easy for us and our design team, because the assets the NHL had at their disposal for us to utilize was enormous,” Reynolds said. “It provided our design team a great opportunity to bring it alive. Not only the photographs but the history and the artifacts that were provided to us by the NHL and the Hockey Hall of Fame. It’s a great exhibit. It’s very informative, very eye-opening and enlightening and I can’t wait for communities across America to experience it.”

The Black Hockey History Tour is one facet of the NHL and NHL Players’ Association’s celebration of Black History Month.

The Flyers, along with the Ed Snider Youth Hockey Foundation, will host the 2019 Willie O’Ree Skills Weekend from Feb. 22-24. More than 100 kids and coaches from Hockey Is For Everyone programs throughout North America will take part in on- and off-ice activities in Philadelphia, including attending the Stadium Series game against the Pittsburgh Penguins at Lincoln Financial Field on Feb. 23 (8 p.m. ET; NBC, TVAS2).

“Since 1958 when Willie O’Ree first paved the way for Black hockey players in the NHL, our sport has seen an upward trend both on- and off- the ice, but there is still room to grow,” said Kim Davis, NHL executive vice president for Social Impact, Growth Initiatives and Legislative Affairs. “The NHL is aware of the demographic shifts in our society, and we are committed to making progress in our effort to become a more inclusive sport that welcomes everyone.

“This month, sharing stories of players past and present as well as pioneers and trailblazers, whether via the traveling museum or across our platforms, we hope to demonstrate to fans and non-fans alike that there is a big community out there, and many pathways to become part of the hockey family.”