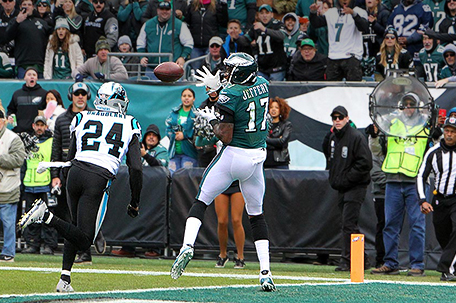 For the first 50 minutes of the game, it looked as if the Philadelphia Eagles were on their way to an easy win over a Carolina Panthers squad that couldn’t quite get out of its own way.

The Birds had built a 17-0 lead and were in control of the game thanks to a pair of touchdown passes from Carson Wentz to Alshon Jeffery and a 46-yard field goal by Jake Elliott. Through three quarters, the Eagles held the Carolina offense to just 145 total yards and Panthers quarterback Cam Newton had completed just 9-of-17 passes for 68 yards.

But in the last 10:41 of the game, the Panthers scored three touchdowns on their last three possessions of the fourth quarter and came away with a stunning 21-17 win that no doubt left Eagles fans wondering how their team lost a game they should have won.

A simple answer is that the Birds, both offensively and defensively, didn’t do a good job of finishing the game. It was the second time this season that the Eagles blew a double-digit lead in the second half. They had a 17-3 lead in their overtime loss to the Tennessee Titans.

Both head coach Doug Pederson and quarterback Carson Wentz agreed that working on how they close games would be among the things they would be doing this week as they head to England next Sunday to take on the Jacksonville Jaguars.

“I think we’re going to be working on a lot of things, but (finishing out games) is one of them,” Pederson said during his post-game press conference.  “We talk about finishing all the time, and it doesn’t mean the first half of games. We’ve got to finish the second half, too.”

It also didn’t help that the Birds didn’t run the ball well as a group. Between Smallwood, Corey Clement, Josh Adams and Wentz, the Eagles ran for just 58 yards, averaging just 2.4 yards per carry. They were also 3-of-12 on third conversions as well.  That basically kept Carolina in the game.

Meanwhile, Newton finished the game completing 25-of-39 passes for 269 yard and two touchdown passes including the game-winner to tight end Greg Olsen with 1:26 left in the game.

After they jumped out to a 17-0 lead, the Eagles offense gained just 36 yards the rest of the way. Still, they had a shot to win the game with a little over a minute left.  On first and 10 from their own 30, the Eagles moved the ball to the Carolina 22 thanks to a pass interference penalty against cornerback James Bradberry, who kept a wide-open Alshon Jeffery from scoring a touchdown.

The Birds would move the football to the Carolina 14 with two opportunities, along with two timeouts, to get the game-winning touchdown or at the very least a first down to prolong the drive.  The Birds got neither.  On third down, Wentz was almost intercepted by Carolina cornerback Eric Reid. In fact, the play was ruled an interception on the field. But the replay booth overturned the play.

The Eagles were not so lucky on the next play because veteran Carolina defensive end Julius Peppers jarred the ball loose from Wentz and it was recovered by defensive tackle Kyle Love at the Carolina 14 with 31 seconds left in the game.

After the game, Wentz, who passed for 310 yards with two touchdown passes, said he wasn’t sure if the team can work on finishing games in practice, but it’s something the Eagles have to get a better handle on quick.

“It’s something we have to do,” Wentz said to reporters after the game. “Without a doubt, I thought it was something we did well last year. I think we’ve shown that we can do it, but offensively we have to look hard in the mirror, myself included, and know late in games, we have to do better.”

We’ll know if they’ve found the right formula when the team takes the field against the Jaguars on Sunday at 9:30a.m. in London’s Wembley Stadium.