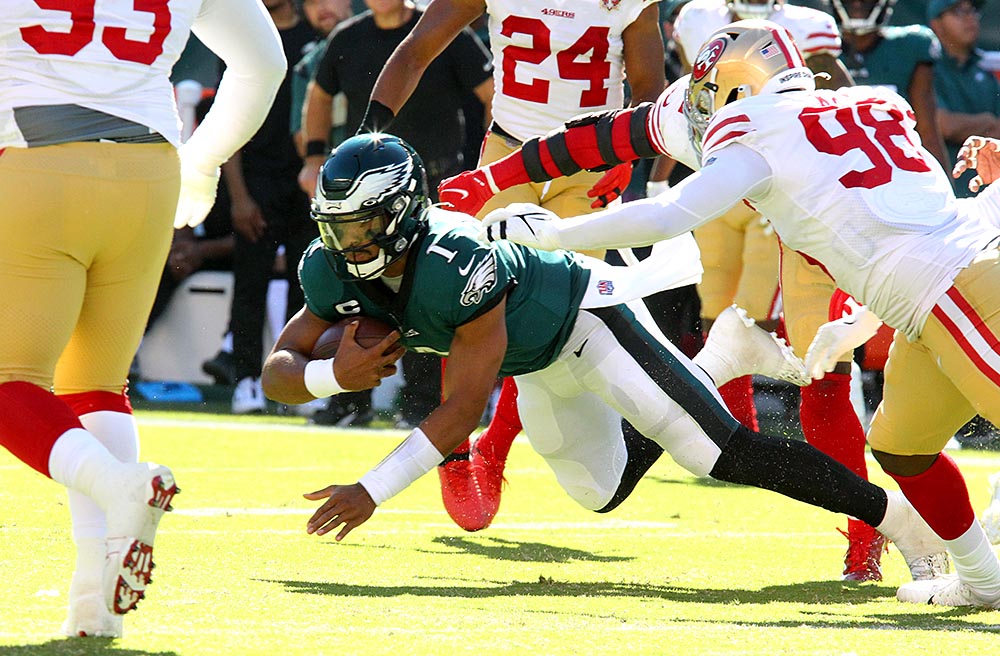 The Philadelphia Eagles lost their home opener to the San Francisco 49ers due to a combination of mistakes and bad coaching decisions.

First-year players, whether it’s at the collegiate or professional level, are going to make dumb mistakes that will cost their team a game.

The same can be said for first-year coaches, especially when they overthink the game in obvious situations.

When the Philadelphia Eagles 17-11 lost to the San Francisco 49ers at Lincoln Financial Field on Sunday, rookie head coach Nick Sirianni’s questionable coaching decisions helped snatch defeat from the jaws of victory in what could have been the Birds second win of the season.

Midway through the second quarter, the Eagles (1-1) had driven down to the 49ers 3-yard line thanks to a 91-yard pass completion from Jalen Hurts to Quez Watkins. It looked like a touchdown was imminent.

You would think that having the ball at the one-yard line after three incomplete passes would make the coach call a run up the middle or let the quarterback sneak it in from there. But on first down, Hurts rolled out to his right and threw an incomplete pass.

On second down, running back Miles Sanders got thrown for a three-yard loss trying to go off tackle. On third down, Hurts couldn’t find a receiver and was shoved out of bounds for a one-yard gain.

Instead of settling for an easy field goal, Sirianni decided to for it on fourth down and three instead, using a flawed version of the team’s “Philly Philly” play from Super Bowl 52. After receiving the ball from running back Miles Sanders on a reverse, reserve wide receiver Greg Ward’s pass intended for Hurts was incomplete.

In a situation where they should at least come away with three points, they ended up with nothing.

“What I regret is that I think I should have called a better play and put our guys in a better position to score,” Sirianni said during his postgame press conference. “I take full responsibility on that. Again, if it works, great and we’re up 10-0. It didn’t, in hindsight, I wanted a different call.”

You mean like kicking the field goal and getting the points? Hopefully, Sirianni would learn not to do something like that again. I get that he’s a so-called offensive “whiz”, but you can’t make goofy calls like that and expect to win. That’s a straight up rookie coaching mistake.

A comedy of errors and missed opportunities

After the Eagles failed to score, the 49ers moved 97 yards in 12 plays, culminating in an 11-yard touchdown pass from Jimmy Garrapolo to Jauan Jennings to give the team a 7-3 lead at halftime.

The Eagles made several mistakes that took potential points off the board. Late in the first quarter, a 36-yard touchdown pass Hurts to Jalen Reagor was called back because the former TCU star stepped out of bounds before catching the pass and was flagged for illegal touching because when a player steps out of bounds, he can’t be the first to touch the ball. Jake Elliott also had a 47-yard field attempt blocked in the second quarter.

In the second half, Eagles penalties on defense prolonged two long 49ers scoring drives. A pass interference penalty on cornerback Anthony Harris on third and three from the Eagles three-yard line kept the 49ers from having to settle for a field goal.

Two plays later, Garrapolo scored a touchdown on a quarterback sneak to give the 49ers a 14-3 lead with 10:55 left in the game.

Another personal foul penalty by K’von Wallace for hitting running back Trey Sermons in the head put San Francisco in field-goal range. Robbie Gould kicked a 46-yard field goal to give the 49ers a 17-3 lead with 5:12 left. To make things worse, the Eagles had exhausted all their time outs.

Jalen Hurts did manage to engineer one touchdown late in the fourth quarter when he ran for 61 yards and pass 14 yards on a five play, 75-yard drive to cut the lead to 17-11 with 4:06 left in the game. But the Eagles couldn’t keep the 49ers offense off the field in the final minutes.

To add insult to the injury of losing a winnable game, the Eagles lost defensive end Brandon Graham for the season to a torn Achilles’ tendon. Graham took to Twitter to tell the fans that he won’t be back until 2022.

Right guard Brandon Brooks is scheduled to undergo an MRI on Monday to determine the extent of the injury to his pectoral muscle that he suffered on Sunday.

The Eagles begin their NFC East schedule on Sunday when they travel to Dallas to take on the Cowboys. Kickoff is at 8:15pm and the game will be shown on NBC-10.