Bills’ McCoy wants nothing to do with Chip Kelly 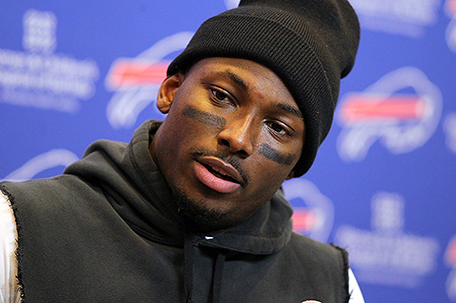 Never mind that the 5-7 Philadelphia Eagles are in a three-way tie for first-place in the NFC East thanks to last week’s stunning upset of the New England Patriots, the focus this week is on the Buffalo Bills, the return of former Eagles running back LeSean McCoy and the apparent discontent of current Birds ball carrier DeMarco Murray.

Throw in a bizarre rant from former Eagles defensive back and ESPN analyst Herman Edwards about the selfishness of both players, and the buildup toward Sunday’s game at Lincoln Financial Field has made a game with playoff implications even more compelling.

During a media conference call with reporters this week, McCoy came out and said that he would not shake Eagles head coach Chip Kelly’s hands during pregame or postgame activities.

“That ain’t happening,” McCoy said during the conference call.

While McCoy said that he has nothing to negative to say about his former coach, there is no love lost between the two on McCoy’s end.

After he was traded to the Bills, McCoy said that Kelly had issues with superstar Black players. While he never elaborated on the specifics of those allegations, McCoy shed some light on his discontent with Kelly by telling reporters that his current head Rex Ryan is more concerned about football.

McCoy said he wasn’t fond of Kelly’s assistants monitoring players sleeping patterns or how they wear their hats.

From what I’ve gathered, McCoy is implying that Kelly wasn’t too enamored with players who have a little flavor and can engage in their own swag and self-promotion. There was also talk that Kelly wasn’t necessarily happy with McCoy’s running style—even though he won the NFL rushing title in 2013 and finished in the top five in 2014.

Speaking of running styles, Murray has not fared well in Kelly’s read-option system.  Murray led the NFL in rushing last season because he was in a Dallas Cowboys offense that fit his downhill style of running with the quarterback under center.  This year, Murray has had to create running lanes by moving laterally, which isn’t his strong suit.

And his numbers reflect the change. Murray has only gained 569 yards in 12 games this season. He is averaging just 3.5 five yards per game with just four touchdowns.

Earlier this week, Murray reportedly met with Eagles owner Jeffrey Lurie to discuss how he was used in Kelly offense.

While Kelly said he understood Murray’s frustrations, there several NFL pundits who have criticized Murray for not only going over his coach’s head, but also for putting his individual accomplishments before the team, especially after the Eagles big upset over the Patriots last weekend.

No NFL analyst was more outspoken and louder than Edwards, who blasted both McCoy and Murray for being selfish.  He was so enraged that he threatened to leave the ESPN set as Trey Wingo and former Dallas Cowboys safety Darren Woodson tried to calm him down.

“It’s not about you, it’s really not. It’s about the game you play. It’s about being a professional,” Edwards said. “You hate to be disrespected by a coach, when a coach thinks, ‘You don’t fit my system.’ Well, if you got something to prove, go out and prove it! You don’t have to talk about it, go out there and do it. Go out there and play. Play football!”

Of course, what Edwards fails to take into consideration is that when your numbers go down, it’s a good excuse for a team ownership to basically call you in to discuss restructuring your contract or just cutting you outright.

Besides, if you want to win as a coach, you do have to have players that fit into your system…

…which is why Kelly and the Eagles are where they are.