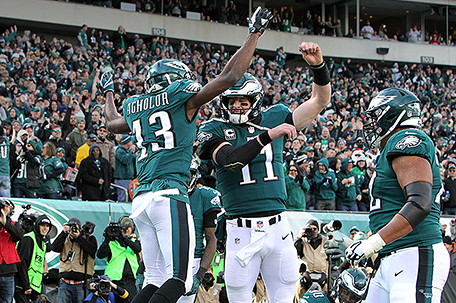 Having all but wrapped up the NFC East, the Philadelphia Eagles are looking to earn home field advantage throughout the playoffs.

Now that the Philadelphia Eagles are 10-1 after the team’s 31–3 win over the Chicago Bears, they will probably be crowned the champions of the NFC East unless something catastrophic happens.

Should the Eagles beat the Seattle Seahawks on Sunday, and/or the Dallas Cowboys lose to the Washington Redskins in their game this week, they’ll lock up the division, leaving the Cowboys and Redskins the Wild Card as their only route to the playoffs. The New York Giants, currently 2-9, are all but mathematically out of contention.

From this point forward, the main thing that the Birds are playing for is home field advantage throughout the playoffs. Currently, the Eagles have a one-game lead over the NFC North-leading Minnesota Vikings (9-2) and a two-game lead over the Los Angeles Rams (8-3), who are in first place in the NFC West and the New Orleans Saints, leaders of the NFC South.

Over the next two weeks, the Birds have two road games against playoff contending teams-the Seahawks (7-4) and the surprising Rams.

“It’s big. This is our season right here,” said Eagles defensive end Brandon Graham. “This is where we separate ourselves because we want to get that bye like we want. We’ve got to go out there and we gotta win.”

While head coach Doug Pederson likes to tell the media he takes a one-game at a time approach to this stretch of the season, he does believe that the next two weeks will be a measuring stick for his team.

“I do see the next two games as a measuring stick. Obviously, it starts this next weekend on Sunday night with our game in Seattle,” Pederson said. “We’ve got a unique set of challenges coming up … (Eagles) are going to be prepared to go up there.” 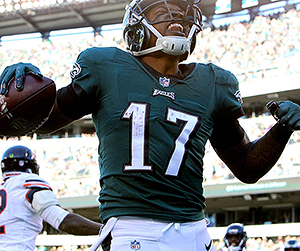 Oh what a feeling! Eagles wide receiver Alshon Jeffrey (17) seems to be saying after scoring in the end zone. The Birds ran over Chicago in a 31-3 win last Sunday. (Photo: Webster Riddick)

The first big obstacle in their way will be a tough road test against the Seahawks in a nationally-television Sunday night game where the Seahawks fan base, euphemistically referred to as “The 12th Man” will rock the walls of Century Link Field.

“Every time I’ve been up there it’s been a very hostile environment,” said Eagles safety Malcolm Jenkins. “Their crowd really gets into it. They take a lot of pride in it. Their team is a prideful group. They’re well-coached and they have good players.”

While the Seattle crowd is going to be loud and intimidating, the Seahawks themselves, especially on defense, aren’t the fierce squad that went to two consecutive Super Bowls.

For one thing, injuries have caught up to the “Legion of Boom,” the Seahawks vaunted defense. When the Eagles and Seahawks take the field this Sunday, Seattle will be without two key starters on defense, cornerback Richard Sherman and safety Kam Chancellor. Sherman’s season ended due to an Achilles tear and Chancellor’s due to a neck injury.

But that said, Seahawks quarterback Russell Wilson is still around to give the Eagles problems. Whether he has a solid running game and an offensive line or not—-and he has neither at the moment— he still has the ability to make plays through either the run or the pass.

Trying to contain Wilson will be a daunting task for what has turned out to be a pretty good Eagles secondary led by Jenkins and strong safety Rashad McCleod. Maintaining coverage of receivers is no easy feat with the way Wilson scrambles around to buy time.

“Russell Wilson has proven to be one of the best quarterbacks in this league. Just his ability to improvise and scramble with his legs and make the throws out of the pocket. When the game is on the line, he’s proven time and time again that he can make the plays to give his team a chance to win.”

On Sunday, Eagles fans will get to see how their squad handles it’s latest test.

All that’s at stake is a chance to play all of the team’s playoff games where the grass….and everything else… is covered in green.