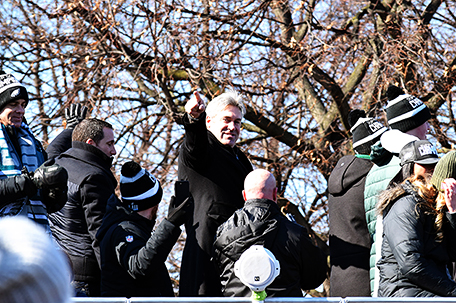 During the Philadelphia Eagles Super Bowl run last season, the Birds always had a knack of making that one big, difference-making play on both sides of the ball to win games.

But in their 27-21 loss to the Tampa Bay Buccaneers at Raymond James Stadium in Tampa, the Eagles got hit with an avalanche of big plays from which they couldn’t recover.

“It’s what we talked about all week,” said head coach Doug Pederson. “We had five plus plays of 20 yards in the Atlanta against our defense and a couple today. We talk about eliminating the big play. … We’re going to learn from this and get better.”

Bucs quarterback Ryan Fitzpatrick came gunning after the Eagles on the very first play when he hit former Birds wide receiver DeSean Jackson for a 75-yard touchdown pass on a well-conceived play-fake that drew safety Malcolm Jenkins out of position and left cornerback Jalen Mills with no safety help.

Fitzpatrick completed 27 of 33 passes for 402 yards and four touchdowns including a pair of 75-yard TD passes. It was the second of those 75-yard scores that helped to change to the momentum of the game and was the first three Buccaneers possessions that ended with touchdowns.

After the Eagles tied the game on a 15-yard touchdown run by Corey Clement, it took the Buccaneers just one play to go up for good when Fitzpatrick hit tight-end O.J. Howard for a short pass in the middle and a missed tackle by Birds cornerback Ronald Darby allowed the former Alabama star turned a moderate gain into a touchdown.

“As far as big plays go, you have to eliminate those,” Mills said. “If you think about it, that’s 14 points. We take that away, we win the ball game.”

The Buccaneers would go on to score on their last possession in the second and their first possession of the third quarter to give the Bucs a 27-7 lead. For the game, Eagles defense gave up 486 yards of offense.

Meanwhile, the Eagles offense was inconsistent for the first three quarters and didn’t  make the plays they were accustomed to making. The daring fourth down calls that Pederson didn’t work for the Birds Sunday against Tampa Bay.

“Offensively, we try to create the big plays. The big play can come in either the run game or passing game,” Pederson said. “Offensively, we were just so far behind in the first half with penalties and lost yardage that it’s tough. You want to be able to on first and down shoot the ball down field and do some things that way.”

While the Eagles were 3-of-5 on fourth down, they were stopped on a crucial fourth and 10 from the Tampa Bay 35 early in the fourth quarter.

It didn’t help that help that the Eagles had some nagging injuries in the offense during the game. Wide receiver Mike Wallace was out with a leg injury after making his first catch of the year. Running back Jay Ajayi missed some time in the game with a back injury and left tackle Jason Peters missed a significant amount of time.

The Eagles as an offense rolled up 412 totals yards, but didn’t anything going consistently. Quarterback Nick Foles had a better game than he did last week, completing 35-of-48 passes for 334 yards. The Eagles rushed for 91 yards as a team, but because the Eagles were so far behind, the running game wasn’t a factor.

Of course, the big thing for this coming week will be the possible return of Carson Wentz. But tight end Zach Ertz pointed out that the Eagles woes in Sunday’s game had nothing to do with Wentz’s absence.

“I can’t wait to get him back whenever that is, but at that same time, we can’t expect him to be Superman either,” Ertz said. “It’s going to be his first NFL game in nine months. His first live bullets in nine months. We have a lot of talent on this offense where [we] shouldn’t have to wait on (Wentz) to solve our problems. We have to play better, and we will.”