The Big 3 Hits The Court 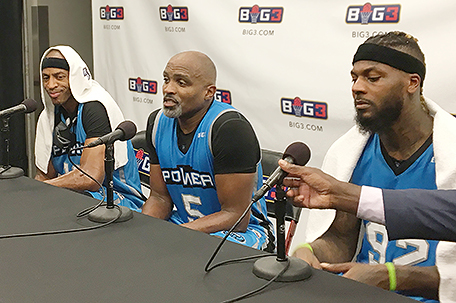 The Big 3 Professional 3-on-3 Basketball League came to the former home court of NBA Hall of Famer Allen Iverson last Sunday to showcase its own special brand of NBA action.

But when Iverson’s squad Three’s Company took the floor, the former Sixers star was on the sidelines, not the hardwood.

For the thousands of local fans gathered in South Philly, it was a huge disappointment that they couldn’t see Iverson, despite fans chanting “We Want AI.” The only glimpse that fans got of him was as he stood on the sidelines facing another Sixers great, Julius “Dr. J” Erving.

That’s not saying that there was no Philly flavor on the Wells Fargo court.

You had former San Antonio Spurs, Roman Catholic, and LaSalle star Rasual Butler, who plays for the Power 3’s Ball Hogs squad. While a bone bruise limited his play, Butler said he was glad to be back in Philly.

“It’s really special to come back home,” Butler said. “I’m really upset that I this bone bruise because I couldn’t play that I wanted to, but it’s still good to play in front of people. I always get excited about coming home,” Butler said.

Fans also got to see Cardinal Dougherty and Houston Rockets star Cuttino Mobley play for Team Power, who showed glimpses of his NBA days by scoring most of his team’s points when his team was on the floor.

“I get to play basketball, I’m always excited,” Mobley said. “Of course, you’re always excited when you play at home and people that you grew up around.”

But for some of the Big 3 players, Iverson served as motivation to join.

“Bubba Chuck is my childhood idol,” said former North Carolina Tar Heel Rashad McCants. “Growing up, a lot of my game comes from his influence. His style, his tattoos, the headband. To have a guy like that be apart of this is one of the reasons why I signed up is to about around guys like these. .. History of all these guys as players and coaches is elite company.”

While Iverson’s more presence on the floor with a basketball would have been enough for this group of long suffering Sixers fans, it would have ultimately been a disappointment to fans hankering for the AI that took the Sixers to the 2001 NBA Finals if we’re honest with ourselves.

But then again, that’s not really the purpose of the Big 3. It’s purpose is to allow recently retired players like Iverson the chance to be around former peers and the game they all loved. 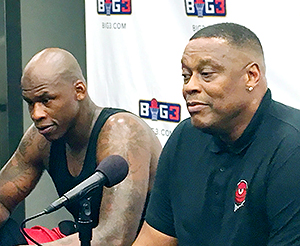 The Big 3 League, co-founded by media mogul Ice Cube, is a chance for these players to hear the roar of the crowd, feel the flow of their competitive juices, and play in front of nationally televised audience on Fox Sports 1.

There’s no clock in these games other than the 14-second shot clock and the first team to 50 wins, provided they win by at least two points. There are also some gimmicky things like the seemingly impossible four-point shot.

Some of the coaches of the teams are NBA Hall of Famers like Dr. J  Julius Erving, George “The Ice man” Gervin, Gary Payton,  Rick Mahorn and Clyde Drexler. They’ve been having fun as well.

“This has been a blast. I love it,” said Drexler, who coaches Power. “It’s the greatest show on earth this year. “

What makes the three-on-three league compelling is not so much the basketball on the court being played by guys well past their prime, it’s the feeling of camaraderie and coming together for a purpose for ex-NBA stars trying to cope with life after their playing days are over.

“Just being back in NBA arenas, playing with guys we used to play, being around Hall of Famers as coaches, being back in hotels, eating with each other. I know for myself I miss that,” said DeShawn Stevenson, who played with the Utah Jazz, the Washington Wizards and the Atlanta Hawks.  “I think being in this type of situation playing three-on-three half-court not full court is just a blessing.”

The transition from living the NBA life can be a difficult for a player once he decides to hang up the sneakers or the cleats. Not everybody can get a job in television gater tjeu. They can experience severe depression. They go from living a disciplined, more structure life to having plenty of time on their hands.

It could be argued that the Big 3 is kind of a support group for guys who just recently retired from the game because they get to be around each other and they get the hear the roar of the crowd.

“When I first retired, the first six months was probably the hardest time of my life because everything about my regular routine for 18 years has changed,” said former NBA star Jermaine O’Neal. “To get this opportunity to get on a plane every week, come into these locker rooms and arenas, it’s truly a privilege.”

Allen Iverson back in Philly tonight, eager to please fans