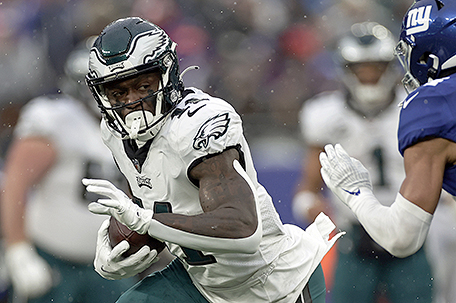 As the first team in the NFL to make the playoffs, the Philadelphia Eagles are starting to play their best ball.

EAST RUTHERFORD, N.J.— The one thing that you can take away from the Philadelphia Eagles’ resounding 48-22 win over the New York Giants is that the Birds are the best team in the NFC East, the loss to the Washington Commanders notwithstanding.

On Sunday, the Eagles not only improved their record 12-1, but they also became the first team to clinch a playoff spot. In addition to scoring the most points on the road over the G-Men in team history, the Birds are also 3-1 in the NFC East.

Most importantly, the Eagles are starting to resemble what the top seed in the NFC playoffs should look like. In three straight games, the Eagles have scored more than 30 points. The Birds are dominating the opposition on both sides of the ball.

“If anything, that’s when you want to get hot,” said Eagles defensive end Brandon Graham, who had three sacks against Giants quarterback Daniel Jones. “You want to get hot toward the end so that you could carry it over to the playoffs. Things are coming together. …Our best ball is starting to happen before we make this run.”

There wasn’t much drama in the Birds’ beatdown of the Giants at MetLife Stadium. The Eagles jumped out to a 21-0 lead midway through the second quarter thanks to a pair of touchdown passes from Jalen Hurts to Devonta Smith (41 yards) and A.J. Brown (33 yards). Miles Sanders opened the scoring in the first quarter with a three-yard touchdown run.

The Eagles led 24-7 at halftime. The closest that New York came to making it a competitive game was when a one-yard run by Giants quarterback Daniel Jones made the score 27-14. But the Eagles put the game out of reach by scoring 21 unanswered points and leading the people at Fox Sports to switch to another game everywhere but Philadelphia and New York.

Eagles quarterback Jalen Hurts had another outstanding game running the Eagles’ offense. He completed 21-of-31 passes for 217 yards and two touchdowns. He also scored a touchdown in the running game and gained 77 yards on the ground.

When asked about the success of the Eagles’ offense over the last three weeks, Hurts said it all goes back to his team’s rigorous preparation throughout the season.

“I know the preparation that we put in, I know how we prepare, and I know the time that we invest into it,” Hurts said. “I know what we sacrifice to come out here and play on Sundays, but not only that … the preparation throughout the week, coming home late, getting up early. If you want something, you have to be able to sacrifice some things and work for it … You want to execute at a high level, you want to collect the check, you want to let all the work show. I think that’s what we’re doing as a football team. “

Running back Miles Sanders went over the 1,000-yard rushing mark for the season against the Giants by gaining 144 yards and scoring two touchdowns. Wide receiver A.J. Brown also passed the 1,000 yards for the season mark with 70 yards receiving and one touchdown at MetLife stadium.

This team hasn’t hit its ceiling yet, Sanders said.

Eagles outside linebacker Hassan Reddick echoed Sanders’s sentiment. While the defense has had its struggles against the run at times throughout the season, Reddick, who had one sack and two tackles for loss, said the defense has been gelling since OTAs (organized team activities) and is starting to play its best football.

“These last couple of weeks, we’ve been playing very elite,” Reddick said. “I think it’s still more growing to do. …we’ve clicked really well, and it shows. You don’t get to 12-1 without that bond and without that brotherhood.”

The Eagles take their 12-1 record to Soldier Field this weekend when the team takes on the Chicago Bears. You can catch this game on Fox-29 at 1 p.m. on Sunday.