The Bernard Hopkins of Football 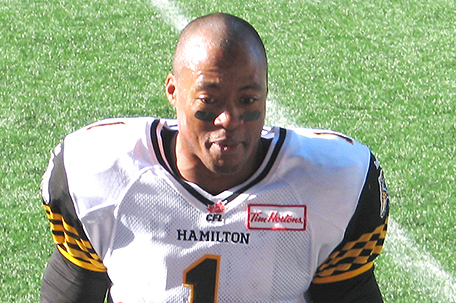 At 41, former Temple University quarterback Henry Burris is showing no signs of slowing down as he heads for his third Canadian Football League Grey Cup.

Former Temple University Owls quarterback Henry Burris and boxing champ Bernard Hopkins have one thing in common. Both men have managed to age in their careers as professional athletes like a fine wine.

Burris, 41, is proof positive that athletic life after 40 is great, and “Smiling Hank”, which is how he’s known to Canadians, can point to a storied career in the Canadian Football League as an example.

Last season, a 40-year-old Burris was the CFL’s Most Outstanding Player, leading the Ottawa RedBlacks, a team that was just in its second year of existence in the CFL, to the organization’s Grey Cup game, Canadian football’s version of the Super Bowl.

Burris has gotten the RedBlacks back into the Grey Cup for the second straight year by beating the Edmonton Eskimos 35-23 in the CFL’s Eastern Division Final. The elder statesman threw a pair of touchdown passes and completed 15-of-26 passes for 246 yards.

Throughout his 17-years in the CFL, Burris has had his share of ups and downs, but he has a knack of never flinching in the face of adversity and has been a winner throughout his career. If the RedBlacks win next Sunday, Burris will win his second Grey Cup. He won his first with the Calgary Stampeders in 2008.

In a career that has been counted out numerous times, Burris simply keeps fighting. He has won the CFL’s Most Outstanding Player award twice in his career (2010 and 2015). He was also the MVP of the 2008 Grey Cup.  He has played two other CFL teams and briefly spent time with the Green Bay Packers and the Chicago Bears in the NFL and played football in what used to be NFL Europe.

Those who cover the CFL are saying that Burris is a shoo-in to be in the Canadian Football Hall of Fame because of the success he’s had playing football North of the border.  Burris ranks third all-time in CFL history in passing yards and touchdown passes.

No one would have seen all of this for Burris during his days at Temple University in the mid-1990s. The Temple-made quarterback managed to become one of the best quarterbacks in Temple football history despite just winning five games in his collegiate career.

By the time he finished his career at Temple, Burris ranked second in Big East history in passing yards and he still owns most of the school’s passing records.  In a sea of losing and disappointment, Burris somehow managed to make the best of a difficult situation at Temple where football was merely a distraction to its nationally-ranked basketball teams.

In a 2009 interview with TempleNews.com, former Temple head coach Ron Dickerson, who mentored Burris during his time at Temple, said the thing he liked about his former quarterback was his composure under fire.

“He never changed his attitude. Even if he threw an interception, he would shrug it off and get back out there,” Dickerson said. “He was serious about wanting to make himself better as a player.”

That’s the attitude that Burris takes with him in all aspects of his life including this year when he lost his starting position after sustaining injury on the pinky of his throwing hand and was placed on the CFL’s six-game injured list.

With all his struggles and his teammate’s injuries this season, Burris knows all too well of how difficult it is to win at any level. His time at Temple taught him face adversity head on and never back down from it.

“We weren’t guaranteed to get back here this year, “ Burris said after his post-game press conference. “It means that much more… We found a way to overcome all the odds that were stacked against us and all the injuries we’ve had.”

Fight or retire: What’s next for Bernard Hopkins after loss to Chad Dawson