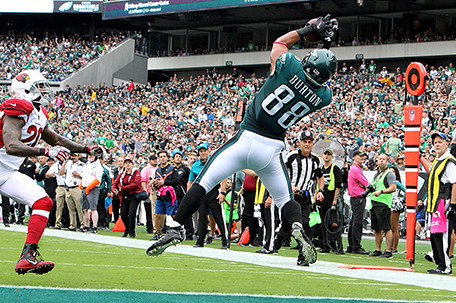 Don’t look now, but the Philadelphia Eagles are not only in first place in the NFC East, they are arguably the best team in the division.

Head coach Doug Pederson likes the potential of his team.

Looking at the rest of the division, the Birds have already beaten the Washington Redskins, who are 2-2 and are inconsistent on offense. Even with a high-powered duo like Dak Prescott and Ezekiel Elliott putting up numbers on offense, the Dallas Cowboys (2-3) are hampered by a defense that ranks 21st overall and has arguably one of the worst secondaries in football.

The New York Giants are 0-5 and are pretty much done for the year.

Of course, you’re not going to hear any of the Eagles entertaining “team to beat” thoughts. Safety Malcolm Jenkins remembers how the Eagles didn’t make the playoffs after a hot start to the season.

“I’ve said we like the progression that we’re making, but none of us signed to win only four games, and that’s all we’ve done so far. We’re not drinking the Kool-Aid just yet,” Jenkins said.

The Eagles came into Thursday night’s road game against the Carolina Panthers with a tremendous 34-7 victory over the Arizona Cardinals.

One of the things that seems to jump out at you in these first five weeks of the season is the Birds versatility on offense-they can beat you running the ball and passing the ball.

In last Sunday’s win over the Arizona Cardinals, the Eagles passing game and all the weapons it picked up via free agency came up huge. Quarterback Carson Wentz passed for 304 yards on 21-of-30 passing with four touchdown passes to four different receivers.

“He could have had five of them out there. It was a big game. Again, Carson is a beast and he shows that he can make plays,” said Eagles wide receiver Torrey Smith, who caught a 59-yard touchdown pass in last Sunday’s game. “Even on the touchdown to [Eagles WR Nelson Agholor] Nelly, which was crazy, he was sliding off of guys, staying calm in the pocket, made a big-time throw and Nelly obviously took, care of business with the rest. That is what our team is capable of.”

The Eagles were able to knock out the Cardinals because they have been running the ball consistently. While it wasn’t as big as the Eagles passing offense, the Birds were still able to get plenty of traction in the running game.  They rushed for 122 yards as a group with LeGarrette Blount leading the way with 74 yards on 14 carries.

There is no doubt that the Cardinals stacked the line and put eight men to stop the Eagles running game and that’s where the Birds hit them with the passing game.

“I just think it’s encouraging that we ran the ball really, really well that last couple of weeks,” said Eagles center Jason Kelce. “We come into a game where they’re really stacking the box trying to stop the run. I think the fact that we’re able to do both (running and passing) of those and we’ve done it well so far, is really an encouraging sign for the offense.”

Another reason for the Eagles success on offense so far in 2017 comes down to third-down conversions. So far this season, Philadelphia is No. 1 in the NFL in third-down conversion percentage at 53 percent. Last week against the Cardinals, the Birds converted 9-of-14 chances (64 percent) on third downs.

“That’s what separates good teams. To be effective on third down and staying on the field, that helps time possession, and that helps the defense,” Wentz said after Sunday’s game. “It’s a big part of the game. Call it the money down. So to be that efficient on third downs is big.”

Against the Los Angeles Chargers back on Oct. 1, the Eagles rushed for 214 yards with Blount leading the way with 136 yards rushing. They also dominated time of possession by a nearly 2-1 margin.

Right now, the Eagles are rolling through the NFC East. Let’s see if it continues.