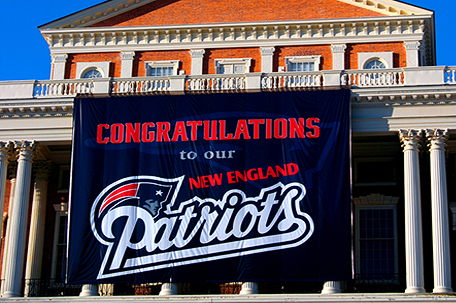 I have been an observer of pro football since I was 6-year-old kid growing up in Baltimore back in 1968 and I like to say that I’ve seen it all.

But the minute you start thinking that something else happens to boggle your mind and make you say, “Huh?”

With under 30 seconds left in Super Bowl XLIX, the Seattle Seahawks had the football at the New England Patriots one-yard line on second down after a four-yard run by Marshawn Lynch. Two plays earlier, an improbable juggling catch by wide receiver Jermaine Kearse put the Seahawks at the Patriots five-yard line.

With the score 28-24, most of America was expecting another run by Lynch to put the game away for Seattle.

Instead the unthinkable, the unfathomable happens.  Russell Wilson passes the ball on a slant to Ricardo Lockette, but Patriots rookie cornerback Malcolm Butler jumped the route and made the game-ending interception. Game over; the Patriots win their fourth Super Bowl in an unforgettable football game.

“The last play we had a formation where we could throw it on them,” Wilson said after the game. “Lockette was coming underneath and the guy made a great play. That’s what it really comes down to—the guy just made a great play.”

The Patriots are the Super Bowl Champions and while Seattle fans at home and at the University of Phoenix Stadium in Glendale, Ariz. were no doubt uttering the phrase, “What the f…..?!”

Let me get this straight, you have one of the league’s most powerful running backs, you’re one yard from pay dirt with one timeout left and you call a risky pass in that situation?

It was a dumb call.

“There’s really nobody to blame, but me and I told them that clearly,” said Seattle head coach Pete Carroll.  “A very, very hard lesson. I hate to learn the hard way, but there’s no other way to look at it right now.”

Granted, it wasn’t the only thing that beat the Seahawks. You have to tip your hat to Brady and the Patriots for overcoming a 10-point fourth-quarter deficit against the league’s best defense. The Seahawks offense didn’t take advantage of chances to increase their lead and let the Pats hang around.

All that said, you don’t pass at the one-yard line with one time out when you have Lynch, who gained 102 yards on 24 carries and was averaging 4.1 yards running through the Patriots defense. Carroll tried to rationalize the call when he spoke with reporters after the game.

“It’s just because of the matchups,” Carroll said. “At this time, it seems like overthinking, but they have goal line guys on. We have three wide receivers, a tight end and one back in that situation; they’ve got extra guys at the line of scrimmage. So we don’t want to waste a running play at that.

Third down, along with their second straight Super Bowl victory never came for the Seahawks, who will be second-guessed ad infinitum all winter until minicamp and organized team activities in the spring. In the lore of NFL history, the fans will talk about this game for a long time.

But when you get beyond what was an extraordinary moment in an exciting, well-played Super Bowl, there were some other moments that determined the outcome of this game.

As much as folks may not like Brady, he made the big plays when it counted. He rallied the Patriots from a 10-point deficit with a pair of fourth-quarter touchdowns passes. For the game, he was 37-of-50 for 328 yards and four touchdowns.  It was not surprising that he was named the game’s most valuable player.

“(Brady) is so calm and collected. He’s the best,” said Patriots wide receiver Danny Amendola. “He gets everybody to play at a higher level. He’s our leader emotionally. … He’s the best quarterback we all love playing for him.”

Kearse had the ball in his hands but dropped it deep in New England territory. Seattle was forced to punt.  The Seahawks went three and out on their next two possessions before that fateful final drive.

“They busted their tails and did everything they needed to do to put us in position to win and unfortunately, it didn’t work out,” Carroll said. “(Seahawks) were on the precipice of winning another championship and unfortunately the play goes the other way.”